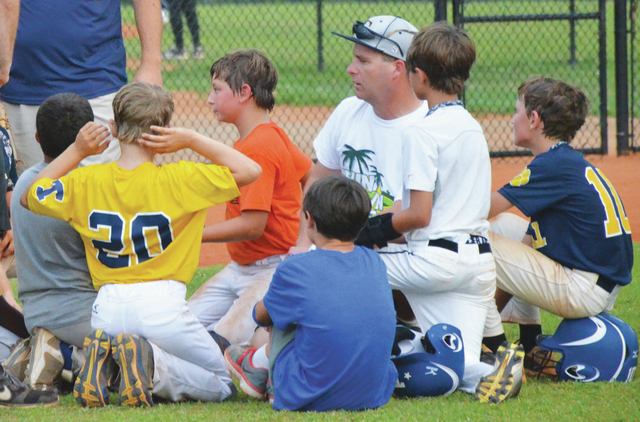 The Troup National 9-10-year-old all-star team huddles at the close of practice on Saturday. Troup is one of three teams playing in the district tournament. Kevin Eckleberry | Daily News

If familiarity breeds success, then the Troup National 9-10-year-old all-star team could be poised to do some big things this summer.

Nearly everyone on the team is part of the same travel baseball team, so the players already know each other well, which isn’t always the case with all-star teams.

Troup National will be one of three teams participating in the Dixie Youth Baseball district tournament that gets under way on Saturday at the Harris Baseball Complex.

The district winner will qualify for the state tournament that will be held in July, and the state winner will advance to the Dixie Youth Baseball World Series in August.

The team’s head coach, Danny Swann, said the players have been a joy to be around.

“It’s been a great team. It’s been real good,” Swann said. “They work together, they talk together, they’re all friends off the baseball field for the most part. It’s just a bunch of good kids.”

Swann said there isn’t any negativity among the players.

“They just encourage each other,” he said. “When they do something wrong, they’re slapping hands with each other. They’re having a big time. It’s the easiest bunch I’ve ever had to teach. They listen, and they do what we want them to. They’re just good kids.”

Swann said there’s also plenty of ability to go along with those great attitudes.

“The ability is far and above anything I’ve ever seen at a 10-year-old level,” Swann said. “They’re just a good group of kids.”

Troup National will begin its tournament stay with a game against Troup American at 10 a.m. on Saturday.

At noon, Troup American and Thomaston will play, and Troup National will play Thomaston at 2 p.m. in the final game on Saturday.

The double-elimination tournament resumes at 6 p.m. on Monday, and if needed, a final game would be played at 8 p.m.