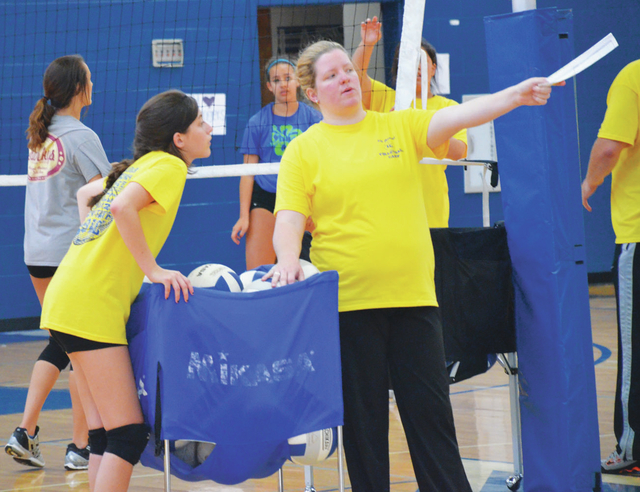 Callaway volleyball coach Heather Smith brought her players to a volleyball camp at LaGrange High this week. Smith is heading into her first season as the team’s head coach. Kevin Eckleberry | Daily News

It’s been a smooth transition.

There’s a new head volleyball coach at Callaway High, but she’s not a stranger to the program.

Heather Smith, an assistant coach on the team for the past three seasons, has taken over the head-coaching duties, and she has been working with the team this summer in preparation for a new season that is less than two months away.

Smith said one of her main goals will be to help players improve and hone their skills as they progress through the high-school ranks.

“There are a few changes, but the common goal is still the same,” Smith said. “On the junior-varsity level, a lot of it is still development, and progression, and going back to the basic skills. When you get to that varsity level, you have the skills to be able to build on them and put them all together rather quickly.”

During the three-day camp that wrapped up on Wednesday, Smith worked primarily with the younger and less-experienced players.

That’s a natural fit for Smith since she was previously the junior-varsity coach at Callaway.

“I worked with the younger group, because I’ve been with that group for a long time,” Smith said. “As I told them, for you, it’s important to learn the skill and see how it all comes together.”

Smith told the players that “all of these skills are puzzle pieces.”

Callaway will open its season on Aug. 13 with a pair of matches at Villa Rica High.

After three other road dates, Callaway will make its home debut on Aug. 27 when it hosts LaGrange and Opelika in a tri-match.

Smith will be relying heavily on her veteran players to lead the way this season.

“Some of these players I have this year that will actually be seniors, they’ve been playing together since they were in middle school,” Smith said. “They all have learned each other, and learned she serves this way, and she serves that way, and she likes to hit it this way. That helps.”

Smith said she enjoys the chance to get together with her fellow volleyball coaches in the county, including LaGrange coach Angie Newton and Troup coach Jodi Dowden.

While Callaway participated in LaGrange’s camp this week, many of LaGrange’s players will be coming over for the Callaway camp in July.

“We work together a lot,” Smith said. “We bounce fund-raiser ideas off of each other, and say hey what are you doing this week in practice. We try to keep that common goal in mind.”