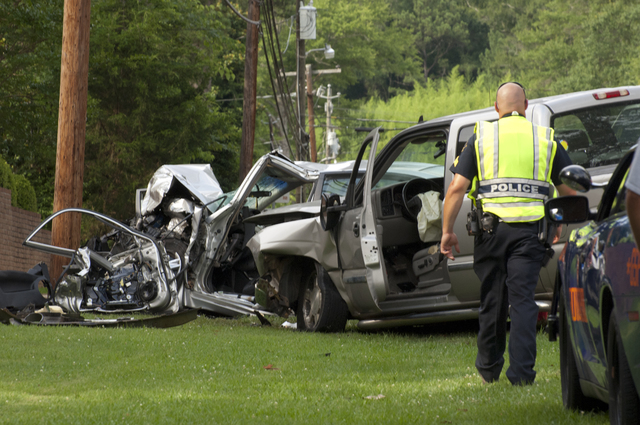 The wreckage of a two-car, head-on crash sits off West Point Road near Holly Street on Thursday in West Point. Five people were injured in the wreck, one of whom was airlifted to Columbus Medical Center.

A Chevrolet Z71 pickup truck driven by a 75-year-old West Point man was headed northbound on West Point Road when it allegedly crossed the center lines and slammed into a southbound Nissan Altima sedan driven by a 49-year-old LaGrange woman near Holly Street shortly before 5 p.m., according to the Georgia State Patrol.

Three juveniles, all females, were passengers in the Altima. A 13-year-old girl was airlifted to Columbus Medical Center; a 15-year-old girl and 16-year-old girl were both taken by ambulance to EAMC-Lanier hospital in Valley, Alabama, according to GSP officials.

The names of the victims were unavailable this morning.

The Altima driver’s legs were extensively injured and she was taken by ambulance to Columbus Medical Center, a GSP official said. The driver of the Z71 suffered minor injures and was taken to West Georgia Medical Center.

The man was driving the pickup truck alone, according to the state patrol.

Georgia State Patrol is handling the investigation and a trooper on the scene said the driver of the Z71 may have fallen asleep at the wheel. But the trooper cautioned the investigation was still in its early phase and more information could come to light.

A portion of West Point Road was closed for nearly an hour as emergency responders worked to free the victims and take them to area hospitals.

West Point police, fire, Troup County Sheriff’s deputies and GSP all responded to the scene. A West Point police officer was first to arrive on the scene and worked to free the victims from the wreckage.

GSP officials said this morning they believed all of the victims’ families had been notified of the wreck.