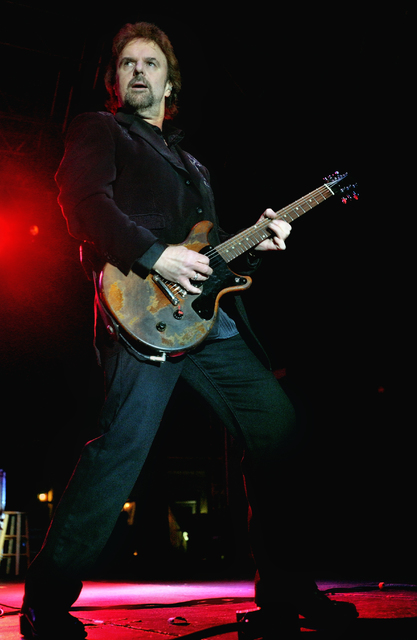 Don Barnes, lead singer of the Southern Rock band 38 Special, is the band’s founder and is slated to perform Friday at Callaway Gardens.

PINE MOUNTAIN — For Don Barnes, the lead singer and founder of Southern Rock band 38 Special, a good song starts with the truth.

“Anybody can contrive the ‘oh baby I need you’ kind of (song),” he told the Daily News in a phone interview. “But if it’s something that really happened to you, that you can really delve into the angles and the perspective of it, (listeners) tend to hear it and think, ‘I felt that same way, that’s happened to me, so I relate to that.’”

That truthfulness has paid off for Barnes and his band mates. In more than three decades, they’ve sold in excess of 20 million records and toured more than 100 cities every year. Friday, they’ll perform live at Callaway Gardens in Pine Mountain.

Their familiar tunes have filled airwaves across the country, but Barnes said he didn’t achieve that level of success alone.

“As a matter of fact, Jim Peterik (founder of the band Survivor) and I were sitting at a kitchen table and I was going through a bad time in my marriage back in the late 70s, early 80s,” Barnes said. “I said, ‘You know, what is it about people that they can’t give each other room and celebrate their differences? To be together, but not pressure the other one.’

“I said, ‘I’ve got this title, what do you think about this: “Hold on Loosely”?’ and (Peterik) said, ‘But don’t let go.’ That’s the first thing he said, and that was a great couplet.”

That brainstorm of the song, “Hold On Loosely,” proved to produce one of 38 Special’s most lionized hits, but they’re also known for their songs “Caught Up In You,” “Back Where You Belong” and other radio staples.

Growing up in Jacksonville, Florida, in an area known for its uncanny ability to turn out award-winning artists, Barnes began playing music at a young age, he said.

“We neighborhood guys — like any other band, you start getting the cops called on you for playing too loud in the garage,” he said.

So, they took their act to the stage.

“We had four naval bases (in Jacksonville), so all of us kids — Duane Allman (The Allman Brothers), Ronnie Van Zant (Lynyrd Skynyrd) — everybody would play sailors’ clubs when we were 14 or 15 years old,” Barnes said. “So we learned all the songs of the day, the cover songs, radio songs. A young kid could make 100 bucks a week. It was pretty good money for a 15-year-old kid.”

Playing those cover songs gave Barnes and his fellow musicians the toolkit they needed to start writing their own songs, he said, but it wasn’t an easy journey. Thankfully, he didn’t go it alone.

“We weren’t great writers on our own, but we were great collaborators,” he said. “That’s the thing, you have to find that medium when you throw out an idea … it’s kind of an insecure thing to write songs and you always have a little ditty, or a little bit of piece of something and you get together and talk about life and what’s going on in your life at the time.”

After fiddling around with different styles of rock, Barnes and his band mates finally found their tone, he said.

“We put our heads together and realized we were more British Invasion, Beatles fans, and we liked a lot more melody,” he said. “We kind of adopted a style of song (we call) ‘Muscle and Melody.’ You’ve got the guitar, with an in-your-face kind of attitude, with a good story and a good melody at the top. It’s simple, but if it ain’t broke, don’t fix it, right?”

Whatever he’s doing, or whatever he calls it, it seems to be working. 38 Special will headline at Callaway Gardens on Friday, with opening act Sam Koon, an up-and-coming Southern Rocker.

The concert begins at 8 p.m. at the Robin Lake Beach and tickets are $25 in advance or $35 the day of the show. Parking is an additional $10. To purchase tickets, visit www.callawaygardens.com/38Special or call 800-852-3810. Overnight packages that include tickets and gardens access are also available.