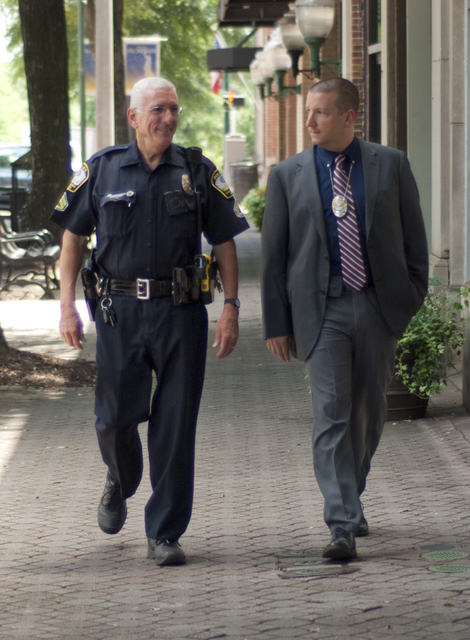 Norm Wynne, left, and his son, Ley Wynne pose for a photograph Wednesday near West Point Lake in LaGrange. Both Wynnes are officers at the LaGrange Police Department. Father and son Norm (left) and Ley Wynne walk down Main Street in LaGrange on Wednesday in LaGrange. Both Wynnes work for LaGrange police; Norm is a corporal and the traffic division’s training officer and Ley is a senior detective in the criminal investigations section.

The apple doesn’t fall far from the tree — neither does the badge, it turns out.

A father-and-son duo, Norm and Ley Wynne, are both officers at the LaGrange Police Department and take their jobs seriously, but they still find time to have fun together.

“We have defined responsibilities, and we’ve done it for years,” said father Norm. “When I see Ley out on the streets or at a crime scene, I say, ‘What’s up?’”

Norm is a corporal and senior officer with LaGrange police’s traffic division. He handles the ongoing training officers undergo and patrols the streets of the city. Ley is a detective in the criminal investigations section, but it hasn’t always been that way.

“He used to work as a detective and I worked in patrol,” said Ley. “Now, he’s on patrol and I’m a detective so we both understand the responsibilities that each position entails. We work well together and accomplish the ultimate goal.”

Being a police officer can be a dangerous job, but the father-and-son pair watch each other’s backs, they said.

“I worry about dad when he’s out there,” said Ley. “Police officers in uniforms are your first contact with citizens, so yeah, I worry about him. I probably listen to the radio closer when he’s working than normal.”

They both understand the potential danger every day brings, and they don’t take their quality time together for granted.

“Anytime we get together, and depart, even though we live right down the street from each other and live in the same town, we always hug each other and always say we love each other,” Ley said. “It’s just something we’ve always done. Your time with your family is precious and shouldn’t be taken for granted, because you never know from one minute to the next what could happen, especially in our line of work.”

“It’s just what we do,” Norm chimed in. “It’s unconditional love.”

Although he’s Norm’s son, Ley has actually worked in public safety longer than his father. Ley began his career at the Troup County Communications Center as a 911 operator in 1997. He worked there for two years before being accepted into a police academy and going to work for the Troup County Sheriff’s Office in 1999 . He’s worked for the LaGrange Police Department for nine years.

Norm came to work for LPD in 2001, he said. His commitment to his job is second only to his family. He’s passionate about serving the residents of LaGrange and making the city the best it can possibly be, he said.

“We want them (residents) to have faith and trust in us and to call us when there’s an issue,” he said. “We will do whatever we can to solve whatever the problem is. If it’s dilapidated buildings or homelessness, whatever the issue is … we want to do what we can to make LaGrange a community that people want to live in and have a relationship with those that serve them.”

For both the father and son, service is what drives them in their daily work. It’s a value that Ley learned when he was involved in Boy Scouts and his father was a scoutmaster.

“Growing up and being in Scouts — that’s a service-oriented organization — you really want to get out there and help other people,” Ley said. “Between scouting and the way I was brought up at home and in church, you just want to give back to your community any way you can, in my opinion. I’m very fortunate to have grown up in a structured home and had good parents that kept us all on track and showed us how to do right, not necessarily what’s popular, but what’s right.”

“Probably one of the highlights of Ley’s scouting career was when we spent three weeks on a trip to New Mexico,” Norm said. “We hiked and did a lot of backpacking. We’ve spent a lot of time outdoors as a family, camping and hiking.”

Spending that family time together is important — not just for the Wynne family, but for all families, Norm said.

“My wife Patsy and I were parents first and friends later,” Norm said. “Kids don’t ask for a whole lot, other than setting a positive role model and spending times with (them). That’s where we placed our emphasis. We could have done other things, but we thought, and still do, that spending time with our family is more important than leisure activities. I didn’t play golf — and I’m not knocking people that do — but that four or five hours would have taken away from my family.”

Ley agreed. Parents should “be there for your kids, be a positive role model. Like dad said, be parents first.”