Footballs flying at the stadium 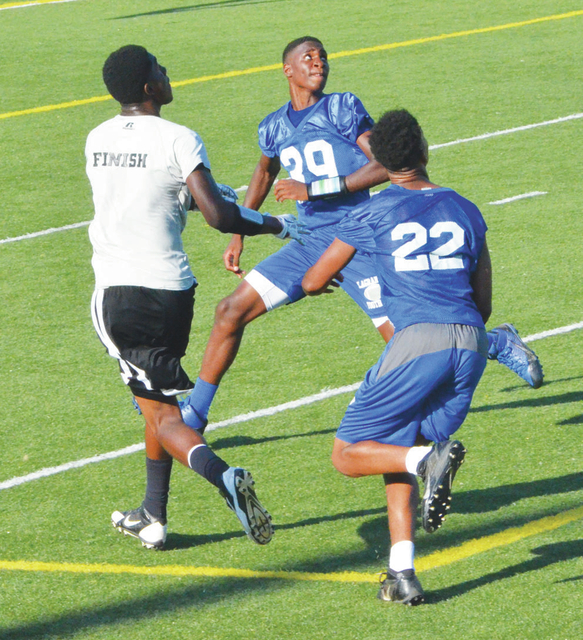 LaGrange defends a pass during a game on Friday during a seven-on-seven competition. Kevin Eckleberry | Daily News

Football was back at Callaway Stadium.

A new season is still two months away, but players from seven different schools were on the turf of Callaway Stadium on Friday afternoon for a seven-on-seven passing competition.

The host Grangers got to play seven different games, each of which lasted 20 minutes.

The seven-on-seven format isn’t real conducive to what LaGrange will do offensively.

Under new offensive coordinator Jay Floyd, who has joined the LaGrange staff after previously coaching at Troup, the Grangers will be a run-heavy team.

A seven-on-seven competition is all about the passing game, though.

There are no linemen, no running, and no tackling.

Every play ends with a pass, unless the quarterback fails to get the ball away in the allotted time.

LaGrange had some success throwing the ball down the field on Friday, with quarterback Amad Ogletree delivering some nice deep balls.

Floyd said getting the ball downfield is what LaGrange will focus on when it comes to the passing game.

“The little dink and dunk passes, that’s not going to be us,” he said. “We’re going to take our shots, and be aggressive, and be real heavy in the run game.”

Ogletree took most of the snaps at quarterback last season, and he got a lot of work during Friday’s competition.

Ogletree will have some talented wide receivers to throw to next season, including Mike Hardy, who had some touchdown catches on Friday.

While the seven-on-seven format doesn’t fit LaGrange real well, it does give the team a chance to “work on the two-minute stuff,” Floyd said.

LaGrange will host another seven-on-seven competition in July, and that’s part of a busy summer for the team as it prepares for a season that will begin on Sept. 21 against Callaway.

LaGrange is heading into its second season under head coach Dialleo Burks.

During the 2014 season, the Grangers finished third in Region 1-AAAAA to make the state playoffs, and they lost to Houston County in the first round.