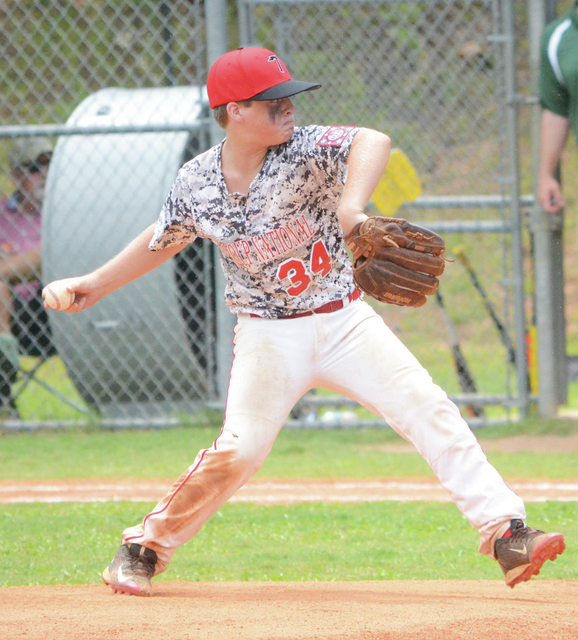 Hogansville’s Demetrius Coleman had a strong outing and was the winning pitcher against Troup National on Saturday. Kevin Eckleberry | Daily News They gave the fans at the Hogansville Sportsplex a show.

In the third and final game on Saturday in the Dixie Youth Baseball 11-12-year-old district tournament, Hogansville and Troup National faced off, with each team looking to finish the day with a perfect record.

In a game with all sorts of suspense and drama, it was Hogansville hanging on for a 5-4 victory to move within one victory of a district championship.

The teams will meet again at 6 p.m. today, and if Hogansville wins, the tournament is over.

If Troup National wins the first game, it will set up a winner-take-all game at 8 p.m.

In Saturday’s game, Troup National had already scored two runs in the bottom of the sixth inning to get within a run and the tying run was on base, but Hogansville pitcher Nathan Karvelas got a strikeout to end the game.

Twice in the game Troup National rallied from a three-run deficit to get within a run, but it was unable to make it all the way back.

“Every time they punched us in the mouth, we punched them back,” Troup National coach Andrew Caraway said. “That’s one of our mottos. If they hit you, hit them back. We feel like we gave up some runs that shouldn’t have been able to cross, but that’s baseball.”

Demetrius Coleman got the start for Hogansville, and he pitched four innings and struck out eight batters.

Coleman left the game with the bases loaded and no outs in the bottom of the fifth inning and his team leading 3-0.

Karvelas entered the game at that point and got the hard-earned save.

“Demetrius was just phenomemal for the first four innings,” Thompson said. “For Nathan to come in, he showed a lot of guts. It was on his shoulders. He gutted it out, and he made the pitches he needed to. It was a good win for us.”

For Troup National, Colton Webb got the start and he was terrific, pitching a six-inning complete game.

“He pitched his tail off, and the defense kind of let him down a little bit,” Caraway said. “Those are all correctable things.”

With one out, Zack Thompson tripled and scored on Will Alford’s single.

It remained a 1-0 game until Hogansville pushed two more runs across in the top of the fifth.

Carson Garner led off with a single, and after Coleman reached on an error, Jacob Karvelas came through with an RBI single to make it a 2-0 game.

Karvelas later scored on a wild pitch, and Hogansville led 3-0.

Troup National answerd with a pair of runs in the bottom of the fifth.

Dawson Wright led off with a single, and Trey Hartley and Caleb Deavers followed with walks to load the bases.

After the pitching change, Tanner Jackson reached on an infield single to bring in a run.

Two batters later, with the bases loaded and two outs, Justin Truett walked to make it a 3-2 game, but Nathan Karvelas got a flyout to leave the bases loaded, and Hogansville still had the lead.

Hogansville added two critical insurance runs in the top of the sixth.

Austin Tigner and Ben Alford walked, and Chase Williams came through with a two-run double, and the lead was 5-2.

In the bottom of the sixth, Cason Firth got things started with a walk, and Ethan Morton singled.

Webb’s fielder’s choice brought in one run to trim Hogansville’s lead to two, and after Wright walked, Hartley’s two-out single made it a 5-4 game, and that’s the way it ended.

“They fought back. They fought hard,” Thompson said of Troup National. “Those are good players over there. We got a couple more runs in that last inning. That was big. We put the bat on the ball.”

Manchester scored three runs in the top of the first inning, but Troup National answered with five runs in the bottom of the inning, and it was off and running.

Justin Truett started and pitched four innings to get the win, and Trey Hartley pitched two shutout innings to finish it.

Troup National had 11 hits, including home runs by Kade Rogers and Dawson Wright.

Ethan Morton drove in two runs, and Deavers and Tanner Jackson each had one RBI.

In the second game, Hogansville held on for a 6-4 victory over Manchester.

Hogansville scored four of its runs in the fifth inning to take a lead it wouldn’t relinquish.

Will Alford hit a leadoff home run to jump-start the fifth-inning rally.

Jacob Karvelas had a triple later in the inning, Jalen Mitchell and Nate Lee each had base hits, and Austin Tigner and Jacob Campbell walked.

Zack Thompson started and pitched three innings, and Chase Williams worked the final three innings to get the win.

“We got the hits we needed, and were able to win it,” Thompson said.