LaGrange sorority has a message ‘for girls only’ 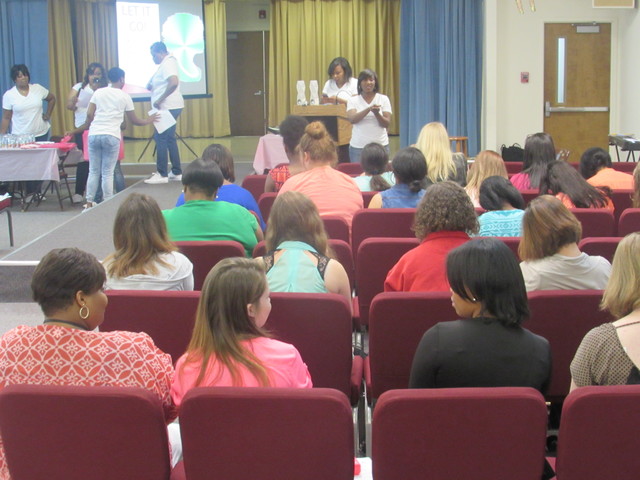 Seven women who are about to become embers of the Theta Xi Omega Chapter of the Alpha Kappa Alpha service sorority lead the For Girls Only workshop sessions Saturday morning at First Baptist Church on Fannin Street. The sessions are meant to boost girls’ self esteem and discuss serious topics such as dating violence, bullying and portraying negative images on social media sites. The workshop may be incorporated into AKA’s Ascend program that mentors young men and women in high school. More than 30 girls sit in First Baptist Church on Fannin Street to participate in the For Girls Only workshop Saturday morning. The sessions are meant to boost girls’ self esteem and discuss serious topics such as dating violence, bullying and portraying negative images on social media sites.

LaGRANGE — The energy and enthusiasm was contagious early Saturday morning inside the auditorium of First Baptist Church on Fannin Street.

Thirty one teenage girls spent part of their day in a workshop titled For Girls Only. The sessions were lead by seven women who are about to become members of the Theta Xi Omega Chapter of the Alpha Kappa Alpha service sorority.

While there was plenty of laughter, singing and even a model “walk off,” the subjects being discussed with the young ladies were serious, and for some, brought up some painful memories they shared with the group.

“Girls shared their experiences in witnessing bullying and domestic violence within their home,” said one workshop presenter.

The sessions were meant to empower young ladies and boost their self esteem in four main areas: self image, public image, sisterly relations and intimate relations. The last course dealt with discussing what was considered a healthy versus unhealthy dating relationship.

The sorority service members said some of the statistics they shared with the group were startling, such as 59 percent of bullying on social media is done by women, and by the age 0f 17, seven out of 10 women won’t like their own self image.

“You can’t be successful unless you have a healthy feeling about yourself,” explained Ericka Davis, one of the workshop presenters. “You’ve got to build the girls so you’re not fixing the women later.”

But the presenters said they also were surprised by some of the things they heard. When service members asked the teens about dating violence, they said about 90 percent of their audience admitted they witnessed some form of dating abuse, whether it was physical, mental or emotional.

“They’re dealing with everyday contemporary issues, and technology and social media has made it exponential … it’s just all out there,” explained Davis. “It’s amazing to see how these kids are navigating this world. Things like these girl empowerment workshops need to happen more often.”

At the end of the day, the teens wrote something on a piece of paper that was burdening them, like hatred or jealousy. They then buried it in the ground as a way of letting go of the past and moving into the future with a clean slate and positive attitude.

“Be nice to your friends,” said Christyuna Beasley, 15. “Be respectful and don’t be rude.”

The group also discussed the “dos” and “don’ts” of social media, and how it can be harmful to a teen’s image, especially when uploading pictures. The information seemed to resonate with the teenage audience.

“They said they can’t wait until next time. I think that’s a success,” said Alisha Marie Scott, one of the workshop presenters. “I think even the adults who participated in the event got something out of it. We empowered the girls … we gave them the tools to put in their toolbox.”

Organizers said the For Girls Only workshop was such a success, the Alpha Kappa Alpha sorority is thinking about including some of the topics into their Ascend program, which mentors both young men and women in high schools.