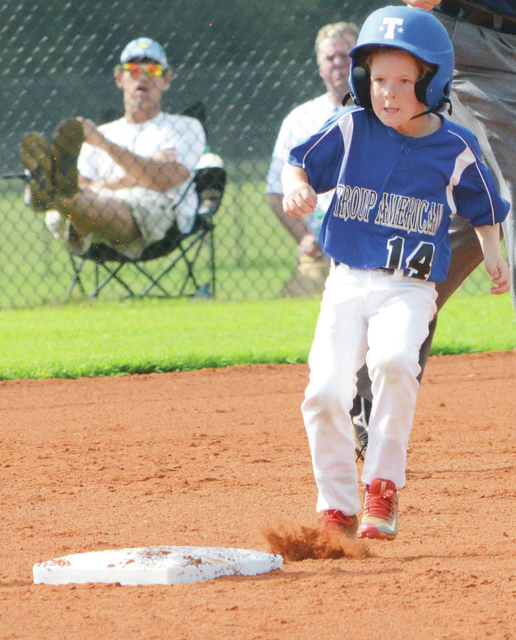 Troup National played two games in the Dixie Youth Baseball 9-10-year-old district tournament on Saturday, and it won them both by a combined score of 39-4.

After opening with a 14-4 victory over Troup American, the Troup National team ended the day with a 25-0 win over Thomaston.

Those two wins have the Troup National team one victory away from a district title, and Troup American is standing in its way.

Troup American used a remarkable final-inning rally to beat Thomaston 13-12 on Saturday to earn a spot in today’s championship round.

Trailing 12-6 against Thomaston, Troup American pushed seven runs across in the bottom of the sixth inning to win by one and finish the day with a 1-1 record.

In Saturday’s first game, it was an all-Troup County showdown between the American and National squads.

After taking a 1-0 lead in the first inning on an RBI single by Ty Medders, Troup National went ahead 6-0 with a five-run second inning that was capped by a two-run home run by Jesse Swann on a ball that cleared the left-field fence with plenty of room to spare.

Troup American got two of those runs back in the top of the third.

Boone Crockett was hit by a pitch, and he later scored on a wild pitch after moving to third on a Steven Hill double.

Troup National tacked on three runs in the third inning to push the lead to 9-2.

Trey Cook and Trevor Booton each had RBI singles, and Cole Garner brought in another run with a groundout.

Troup American fought back and scored twice in the fourth inning.

Eli Jones singled and Bryson Monteith and Jimmy Jackson both walked, and J.T. Burks had a double to drive in two runs.

Swann doubled and scored on a wild pitch, and Colton Esposito drove in a run with a sacrifice fly.

Troup National scored four more runs in the fifth inning to finish it.

On the mound, Booton, Esposito, Medders and TJ Wilkerson each pitched for Troup National.

Troup National made quick work of Thomaston in the final game on Saturday.

Cook had four stolen bases, Wilkerson had a base hit, and Reed Morris and Garner each walked twice and stole a combined three bases.

Cook, Murphy and Stargill pitched and combined for a one-hit shutout.

In Saturday’s second game, Troup American found itself in a desperation situation after falling behind 12-6 heading into the bottom of the sixth inning.

Troup American was a long way from done, though.

The rally began when Monteith and Jones walked, and Dallas Pearson drove in the inning’s first run with a base hit.

Jackson kept it going with an RBI single, and Burks delivered a two-run single to cut Thomaston’s lead to 12-10.

Aftter Pemberton walked, Hill’s base hit brought in two runs, and the game was tied 12-12.

Westmoreland then completed the thrilling comeback win with an RBI single.

Troup American scored twice in the first inning when Blake Oldham reached on an error with the bases loaded.

In the second inning, Pearson singled and later scored to give Troup American a 3-0 lead.

After falling behind 6-3, Troup American got a run in the third inning when Westmoreland scored after reaching on a single.

Jackson had a two-run single in the fourth inning for Troup American.