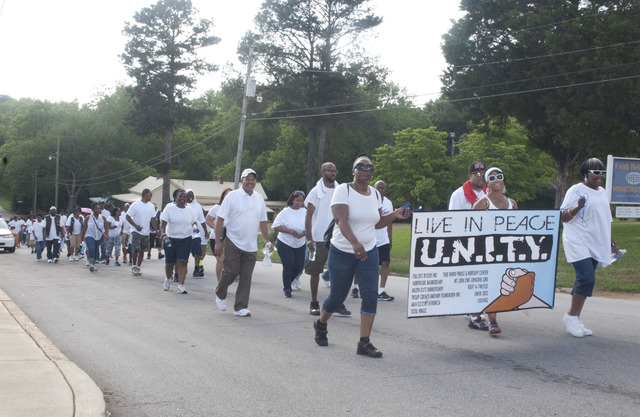 Community members march for peace and unity May 17 in south LaGrange in response to a string of violent assaults in the city. Another march is planned Sunday at 5:30 p.m. beginning at the Niles Street park.

LaGRANGE — Organizers of the Unity Group are planning to hold a unity march on Sunday as part of what group members describe as an ongoing effort to reclaim the city.

“We’re having a march through our city to gain support from our fellow residents and unite each other against the lawlessness we’ve been seeing,” said the Rev. Michael Jackson, pastor of Confidence Missionary Baptist Church. “We want to have the old LaGrange back.”

The march is set to begin at 5:30 p.m. at the Niles Street park. Participants will be walking through the streets of what Unity Group members said are areas that need more positive influence from the community. The Unity Group is encouraging anyone who wishes to participate in the march to wear a white shirt.

“We are wearing white to show our solidarity and let everyone see that we’re against all of these gangs that wear certain colors,” said David Simpson, one of the Unity Group’s leading members. “We’re not just marching against gangs, we want to have a positive influence on the whole city and encourage everyone to come together. We want the people of LaGrange to come out and follow us in taking back our city.”

The group’s first march was May 17 and more than 200 people gathered at Benjamin Harvey Hill Homes and marched through the streets of LaGrange. Members of the LaGrange Police Department joined residents as they walked.

“We were especially thankful to officer Johnny Byrd of the LaGrange Police Department for helping us lead the march,” said Tonya Boyd, spokeswoman for the Unity Group. “When we were kids, we could walk through the streets, and we never worried about being in danger. We want bring that back so our kids can have that, too.”

Just a week after the first unity march, LaGrange Public Safety Chief Lou Dekmar gave City Council members a sobering message detailing the city’s gang problem. Council is set to increase LPD funding in order to hire new officers who will be tasked with tackling gangs and their members.

“This isn’t a black and white issue, and this isn’t an issue that just a few people in LaGrange are dealing with,” said Simpson. “We hope to see people from all over LaGrange and Troup County come out and join us.”

Members of the LaGrange City Council will not attend the march. They are set to attend the Georgia Municipal Association’s annual convention in Savannah.

“I wish we could be there to march with everyone, but we’ve already had plans to go to the GMA’s annual convention, which we attend every year,” said Mayor Jim Thornton. “I support the efforts that this group is making in unifying our city and raising the spirit and morale of LaGrange.”

Simpson and other leaders of the Unity Group said that their aim is to influence LaGrange’s youth.

“We want to get to the youth before it’s too late,” said Simpson. “When you don’t have a strong community, kids will be more inclined to be involved in gangs and make bad decisions.”

Carl Von Epps, former member of the Georgia House of Representatives, is set to be a speaker at the rally following the march. Von Epps will be joined by others from the LaGrange community, including Zsa Zsa Heard, executive director for the LaGrange Housing Authority.

Organizers from the Unity Group said that there will be plenty of water for those who participate in the march. Members of the LaGrange Police Department again are set to join the march and help stop and direct traffic around the planned route.

Jackson said that the march will end at Union Street Park, where community leaders will be speaking to participants and offering prayers. Members have planned a meet and greet at 5:30 p.m. with the march set to begin at 6 p.m. Jackson noted that transportation will be available to help participants return to their vehicles after the march.

“We want to promote peace,” said Simpson. “Our mission is to bring unity to the entirety of our community.”