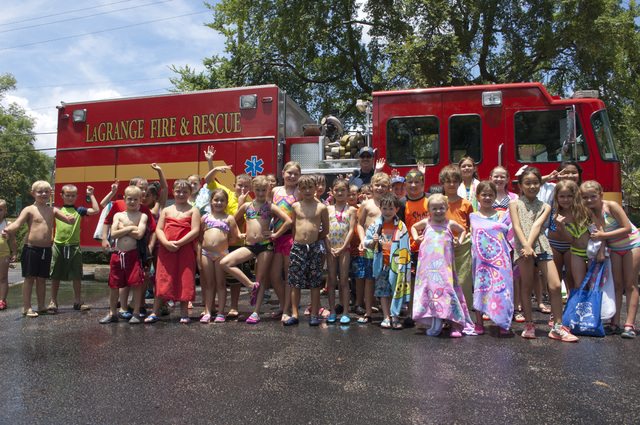 Children from the First United Methodist Church at 401 Broad St. cool off in water sprayed from the LaGrange Fire Department’s Engine Four in a parking lot adjacent to the church Monday afternoon. Monday’s temperature at the LaGrange-Callaway Airport reached 95 degrees, just four degrees short of that day’s record of 98 degrees, set in 1951. Today’s record is 99 degrees, also set in 1951. Children from the First United Methodist Church at 401 Broad St. pose in front of LaGrange Fire Department’s Engine Four. LFD came to came to the church to spray water for the children to play in Monday afternoon.

LaGRANGE — The mercury continues to rise today in Troup County as the National Weather Service has issued a heat advisory in parts of Georgia and the Deep South.

Monday, the temperature at the LaGrange-Callaway Airport reached 95 degrees, four degrees shy of that day’s record of 98 degrees, set in 1951. Today’s temperature is expected to climb into the mid- to upper 90s, with the heat index making the temperature feel as high as 100 degrees. Temperatures are expected to cool to the upper 70s overnight.

The National Weather Services forecasts today to be mostly sunny with a 20 percent chance of showers and thunderstorms after 2 p.m.

A heat index of 103 degrees was expected Monday in southeast Mississippi, south central and southwest Alabama. Temperatures across parts of the region were forecast to climb into the high 90s, with possible heat index values of 105 to 112 degrees.

Here are a few places to cool off:

• The William J. Griggs Recreation Center at 716 Glenn Robertson Drive offers a public pool and is open today from 1 to 5 p.m. Children swim free and adult admission is $1.

• A public splash pad is also available at Calumet Park near the corner of South Dawson and Hines streets. It is free and open to the public.

In Atlanta, city officials announced Monday that 11 public swimming pools will remain free for everyone until Thursday due to extreme heat. The National Weather Service was projecting highs in the mid-90s in the Atlanta area on Monday. The weather service also said that in parts of south Georgia, the heat index – the soaring temperatures combined with high humidity – was expected to reach 105 degrees.

Wes Tyler of the South Carolina State Climatology Office said certain aspects of the heat wave are unusual, but not unprecedented. He said longer daylight hours and a stretch of high pressure systems have contributed to the higher temperatures.

“We’ve had 100 degree days in May before. It’s not uncommon, but it’s unusual to have a stretch of 100 degree heat this early in June,” Tyler told the Associated Press. “The only place that you can really escape the heat here in South Carolina is in probably the mountain valleys near moving water, or some of the higher summits that are forested.”