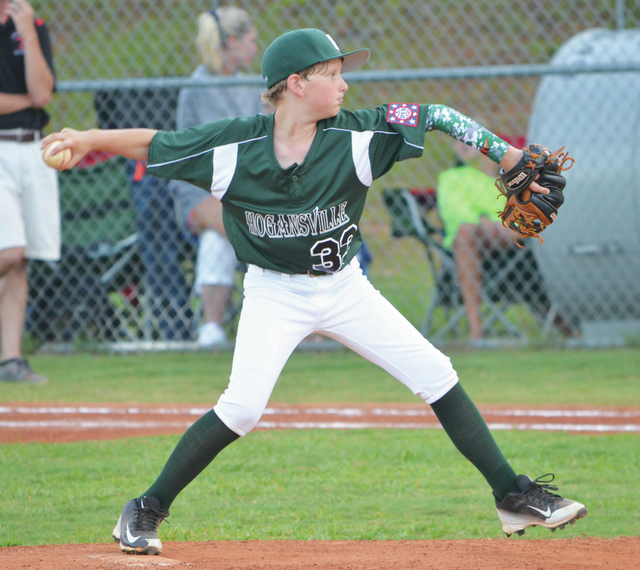 Troup National’s Ethan Morton arrives safely at second base during the sixth inning of Monday’s game. Morton had an RBI hit in the inning. Kevin Eckleberry | Daily News After withstanding a furious late-game rally, the Hogansville 11-12-year-old all-stars are headed to state.

On Monday at the Hogansville Sportsplex, it was Troup National and Hogansville facing off in the championship round of the Dixie Youth Baseball district tournament.

Hogansville held a seemingly comfortable 7-1 lead as Troup National came to the plate for its final at-bat in the bottom of the sixth inning.

Troup National wasn’t going to go away quietly, though.

After stringing five consecutive hits together, Troup National was within two, and the tying runs were on base.

Nathan Karvelas was called upon to put out the fire, and he made it happen with some help from third baseman Carson Garner, who fielded a ground ball and made the throw to first base for the game-ending out.

The 7-5 victory secured the district championship for Hogansville, which qualified for the state tournament that will begin on July 10 in Augusta.

Hogansville went 3-0 in the tournament, and that included a pair of hard-fought victories over Troup National, as well as a win over Manchester.

Troup National, which didn’t qualify for the state tournament, lost its two games to Hogansville by a combined three runs.

“They fought back. We knew they would. They’re a great team,” Hogansville coach Scott Thompson said of Troup National. “We knew it was going to be tough to come in here and beat them. I’m proud of our guys.”

For its part, Troup National went down fighthing.

“I told the fellows, if you’re going to go down, you better go down swinging,” Troup National coach Andrew Caraway said. “We made things a little interesting.”

Chase Williams was the starting pitcher for Hogansville, and he came within one out of throwing a complete game.

Demetrius Coleman, the winning pitcher in Saturday’s win over Troup National, faced three batters before Karvelas got the final out.

“Chase pitched a phenomenal game,” Thompson said. “We were really, really proud of him.”

Hogansville scored one run in the second inning, two in the third inning, three in the fourth inning, and one more in the fifth to build the 7-1 lead.

Karvelas had a big day at the plate, going 3-for-3 with three doubles, and he scored two runs.

Carson Garner and Jacob Karvelas each had two hits, and Williams was on base twice with a pair of walks with a run scored.

Coleman had a hit and a walk with a run scored, Jacob Campbell and Zack Thompson each had a hit, and Nate Lee walked and scored a run.

For Troup National, leadoff hitter Cason Firth was 3-for-3 with a pair of doubles and an RBI, Ethan Thompson had two hits with a double, Austin Manning had a hit and a walk, and Ethan Morton, Colton Webb and Tanner Jackson each had RBI singles.

Most of Troup National’s offense came in the sixth inning when it broke through for four runs, all with two outs.

Firth, Morton, Webb and Jackson had consecutive RBI hits to bring Troup National within two, and runners were on second and third, but that’s where the comeback bid ended.

“That’s a great ballteam,” Caraway said. “Scott and all them do a great job. They’re a well-coached team, I just felt like we made one too many mistakes in that game. Both teams fought their tails off.”

Thompson said everyone on the team did something to help Hogansville win the district title.

“It was a whole team effort,” Thompson said. “We knew that all 12 guys would contribute, and they did.”