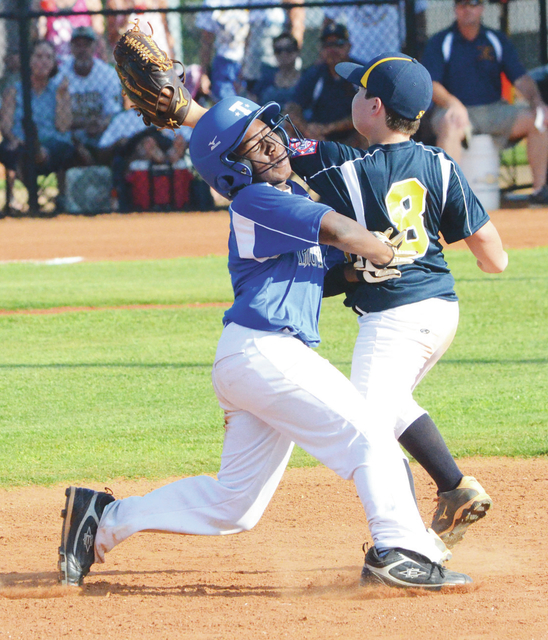 After watching what Troup American did to Thomaston on Saturday, Troup National coach Danny Swann made sure his team didn’t get comfortable in Monday’s championship game in the Dixie Youth Baseball 9-10-year-old district tournment.

In the second game on Saturday, Troup American rallied from a six-run deficit in the final inning to beat Thomaston 13-12.

On Monday, Troup National surged to a big early lead against Troup American, but Swann stressed to his players that there was a long way to go.

“In the American and Thomaston game, Thomaston had them by six runs in the last inning, and that team kept plugging and plugging and ended up winning it,” Swann said. “That’s a very opportunistic baseball team that we played. We just didn’t feel like we needed to give them any opportunity at all.”

Troup American made sure there wouldn’t be any comeback.

Troup National scored eight runs in the first inning, and it added eight more runs in the second inning on the way to a 16-0 victory.

The game ended after three innings because of the run rule.

Troup National finished off a dominant performance in the district tournament.

Troup National played three tournament games, and it won all three of them by a combined score of 55-4.

Swann said that sort of performance is “what we expect out of them, and they know that. They want to succeed.”

Troup American, which finished the tournament with a 1-2 record, will be joining Troup National in the state tournament that will be held in Manchester beginning on July 10.

After pitcher Trey Cook set Troup American down in order in the top of the first, Troup National pushed eight runs across in the bottom of the inning.

After Jesse Swann and Devin Murphy walked and Colton Esposito singled to load the bases, Ty Medders reached on a fielder’s choice to bring in the game’s first run.

T.J. Wilkerson added an RBI groundout, Seth Stargell drove in a run with an infield single, and C.J. Stephens capped the eight-run rally with an RBI double.

Troup National kept it going in the bottom of the second.

With the bases full, Cook’s sacrifice fly made it 9-0, and after a Garner base hit, Booton stepped to the plate with the bases loaded.

Booton came through with a bases-clearing triple, and Troup National led 12-0.

Wilkerson and Esposito added RBI singles in the inning, and Swann walked with the bases loaded to bring in another run.

Cooks and Medders combined for a no-hitter.