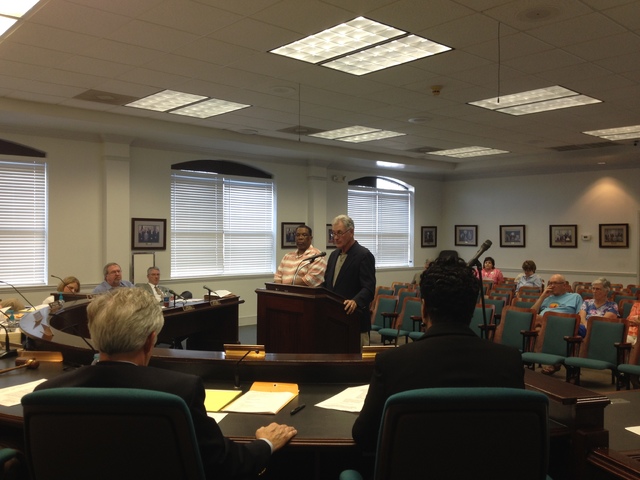 At the podium, Ricky Wolfe, right, former county commission chairman, and Carl Von Epps, retired house of representatives member, address the LaGrange City Council on Tuesday about funding the racial reconciliation program planned to soon begin in Troup County. The council voted 5-1 to provide $50,000 to the program led by Wolfe and Von Epps.

“This is a body of work unlike anything LaGrange has ever attempted to do,” said Wolfe. “We know and understand that we are about to open up a topic that, if not handled properly, can make what is currently a bad situation even worse.”

Wolfe and Von Epps spoke to council members about how the program will operate, and asked that the city help fund the effort. Hogansville and West Point have both voted to provide initial funds to the program, but Wolfe said that he hopes the effort will become reliant on donations, over time, from entities other than government.

The original program that Wolfe and Von Epps are working with, Hope In The Cities, is based in Richmond, Virginia.

City Council voted to provide $25,000 in one budget cycle and another $25,000 in the following budget cycle. Councilman Nick Woodson voted against the measure to fund the program because he said that he was unsure of what the proposal contained at the time of the vote.

“I wasn’t aware of what this program really is and what it’s all about,” said Woodson. “I don’t have any idea what it contains, and I would like to know what the track record of these groups involved are.”

Other council members voiced support for the program. Council members said it is important to address the issue of racial divides before a potential controversial event, citing situations in Ferguson, Missouri, and Baltimore.

“We want to address an issue that is not unique to LaGrange, but it is one that is present throughout the United States,” said Mayor Jim Thornton. “A problem that has developed over centuries is going to take some time and thoughtfulness to address.”

Added Councilman LeGree McCamey: “It only really takes a spark to get the fire going. We could do nothing and pretend that there’s not a problem. For us to try to do something to build that trust and build those bridges is really worth more than our finite minds can conceive.”

Von Epps noted that the program has caused much controversy among Troup County residents.

“This requires leadership. There is a lot of negativity in the world, and for you to step forward and want to do something about it takes leadership,” said Von Epps. “You’re going to have naysayers in just about anything you try to do that’s for the good.”

The race reconciliation program is planned to operate in three different stages. For the first stage, they plan to select 160 members of the Troup County community who will begin an 18-month program aimed at educating participants on race reconciliation. Wolfe said that if the community is supportive enough of the initiative, then 40 of the 160 members will be selected to move on to the second phase, which will focus on how to deal with racial issues in their community.

“This initiative will provide a framework for a diverse array of citizens to get to know each other better, to understand the perspective of those who have experienced their city in ways different than their own and to appreciate the impact that our troubled racial history has on our present,” said McAlexander. “It is our hope … that such lines of communications may serve to relieve tensions, certainly to relieve tensions in the event of a crisis – God forbid.”

Council members recognized that the issue is one that has been prevalent in LaGrange and Troup County for a long time and that it is important that it is dealt with now.

“It is long overdue,” said Councilman Willie Edmondson. “For Troup County to become the best that it can be, this is badly needed in our area.”