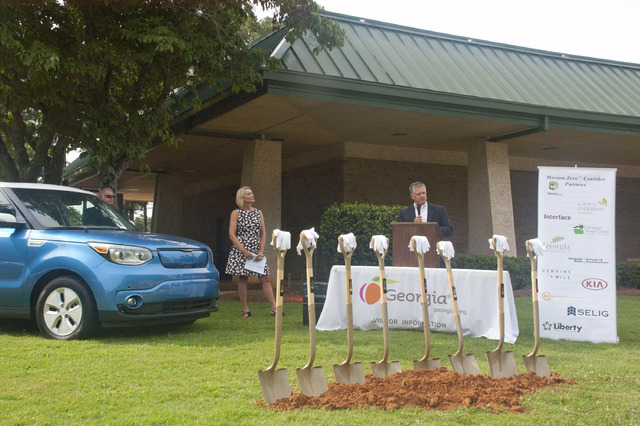 Officials with organizations sponsoring a charge station for electronic vehicles break ground Wednesday morning for the planned station at the Georgia Welcome Center on Interstate 85 in West Point. Owen Everingham, 12, sits in the driver’s seat of a brand new Kia Soul EV. The electronic vehicle is the first of its kind released by Kia Motors. West Point Mayor Drew Ferguson, left, accepts a donation on behalf of the city of West Point from the Ray C. Anderson Foundation and Kia Motors for the installation of a PV4EV quick charge station at the Georgia Welcome Center in West Point. With Ferguson are Harriet Langford of the Ray C. Anderson Foundation and Randy Jackson, senior vice president of human resources and administration for Kia Motors Manufacturing Georgia. West Point Mayor Drew Ferguson addresses the crowd during the groundbreaking celebration for a PV4EV quick charge station at the Georgia Welcome Center on Wednesday in West Point as Harriet Langford of the Ray C. Anderson Foundation looks on.

WEST POINT — Local organizations and businesses gathered at the Georgia Welcome Center at Interstate 85 on Wednesday for a groundbreaking event celebrating the installation of an electric vehicle charging station. The photovoltaic, or PV4EV, quick charge station is sponsored by the Georgia Department of Economic Development. It will be the first installation in a plan developed by the Georgia Tech College of Agriculture and part of the Mission Zero Corridor funded by Kia Motors America and organizations that include the Georgia Conservancy, LaGrange-Troup County Chamber of Commerce, Interface and the cities of LaGrange and West Point. “Soon, EV (electronic vehicle) drivers will be able to drive from Montgomery, Alabama, to Atlanta, Georgia, with ease,” said Harriet Langford, trustee for the Ray C. Anderson Foundation. “The PV4EV charging station will be powered from the sun.” According to the Georgia Department of Economic Development, the state has the largest share of electric vehicles in the U.S. market. The station is meant to open up the West Georgia area as a destination to a new market of travelers coming from the Montgomery area. The event featured the release of the Kia Soul EV, an electric, urban crossover vehicle that is expected to have fuel efficiency capabilities of nearly 120 miles per gallon, officials said. “The Kia Soul EV is the first EV car that we’ve released,” said Randy Jackson, senior vice president of human resources and administration for Kia Motors Manufacturing Georgia. “We’re proud to be the leader and contributor to this project. Hopefully, we can get people to follow us and do some good things for a lot of people in this region.” The charge station will be powered by a solar array, which will be placed in front of the Georgia Welcome Center’s main entrance. The array will hold 3,000 watts of photovoltaic solar panels, which will convert sunlight directly into electricity. The solar array is being developed by Hannah Solar, a company specializing in solar energy. “The (array) will convert sunlight into electricity and, from there, we will convert it into alternating current and we will tie into the grid, which feeds the charging station,” said Anthony Coker, vice president of marketing and development for Hannah Solar. “If more people charge and there’s not enough sunlight available, then we can pull electricity off the grid. If there’s not many, then we can offset the whole load here.” Coker said that the charge station is able to charge about 20 vehicles per week with the amount of sun collected through solar panels. He said that the speed of the charging station is “second to none.” “It’s a DC (direct current) fast charger, which is the fastest you can get,” said Coker. “This is a level three charge technology. If you’re halfway down on your vehicle’s charge, you can top it off in less than 30 minutes here.” The installation is part of the Mission Zero Corridor, a major project funded by the Ray C. Anderson Foundation, which aims to be the most energy efficient and sustainable stretch of highway in the world. The foundation has partnered with Kia Motors to develop the corridor. “The way that the solar energy panels will work should keep the minimum cost for the welcome center’s operation down,” said Langford. “The (solar array) will be very eye catching, and we’re hoping that it will draw a lot of business to the welcome center.”