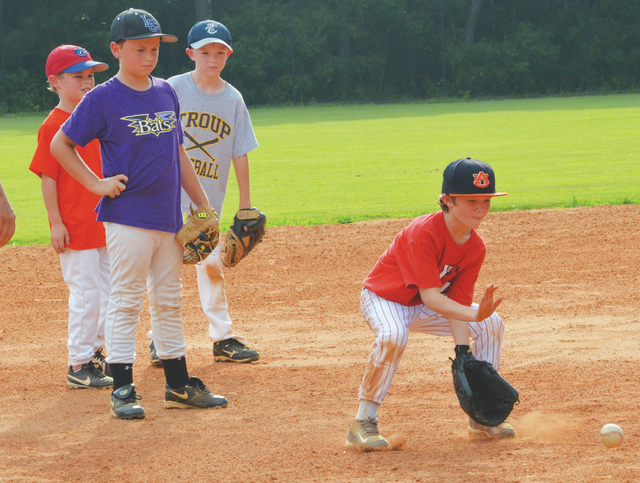 The Troup County 7-8-year-old all-star team will participate in the district tournament on Friday and Saturday in Manchester. Kevin Eckleberry | Daily News The Troup County 7-8-year-old all-stars have practiced, they’ve scrimmaged, and they’ve done everything they can to prepare for tournament season.

Now they’ll try to go out and win some ballgames.

The team will compete in the Dixie Youth Baseball district tournament on Friday and Saturday in Manchester, and it will participate in the state tournament the following weekend, also in Manchester.

One of the team’s coaches, Jamie Bozeman, said it’s been a great group to work with, and he appreciates the eagerness of the players.

“Even at a young age, being able to compete, it’s just exciting for them,” Bozeman said. “Every day in practice, and in the scrimmage games we’ve had, you can just see it, it’s just in their eyes. I love it.”

Troup County will play two games on Friday, beginning with a 6 p.m. match-up against Thomaston.

If Troup County wins at least one game on Friday, it will play again on Saturday in the double-elimination tournament.

The other teams in the tournament are Hogansville, Manchester and Thomaston, and all four of those teams will advance to state, no matter what happens this weekend.

Bozeman said that when he and the other coaches first got the team together, “what we tried to do from Day 1 was find out where these kids were fundamentally, and just build on that.”

He said the players have worked hard, and they’re ready for tournament play.

“They work hard, and they get after it,” Bozeman said. “And it shows. (Tuesday night) we were at Heard County, and the umps over there said I haven’t seen too many kids as eager or as excited. It’s been good.”

It’s a coach-pitch format in the 7-8-year-old age group.

During the Troup County recreation season, many of the players played tee-ball, but they also played some coach pitch to help them get ready for tournament play.

“The way the all-star tournaments are done at the district and state level is, it goes back to coach pitch,” Bozeman said. “We did half the year machine pitch, and the last half coach pitch so they got used to seeing the ball coming out of your hand.”

For the Troup County team, Bozeman will be doing the pitching.

“When I first started out, I would throw it right down the middle, I’m going to keep it at a constant speed,” he said. “It started getting to a situation where every team is different. The strike zone for each kid is different. You’ve got to find their zone.”