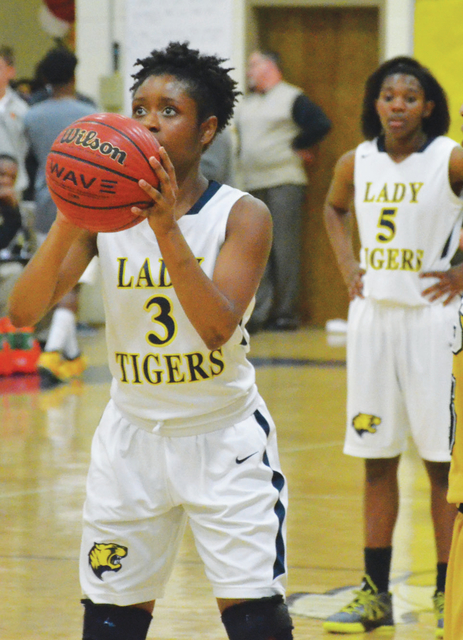 The Troup Lady Tigers have been working out twice a week during the summer as they look ahead to a new season. All but one player from the 2014-2015 team is returning. Kevin Eckleberry | Daily News Akhya Mitchell, who helped out during a basketball camp this week, is one of the returning players for the Troup Lady Tigers. Kevin Eckleberry | Daily News

It was a step in the right direction, but there’s a lot of work to do.

The Troup High girls’ basketball team won more games last season than it did in the previous two seasons combined, but no one was satisfied.

With an eye on enjoying a breakthrough 2015-2016 season, the team has been getting together a couple of times per week this summer for practice sessions, and they’ve also played a handful of games.

‘It’s going really good. It’s been fun,” said Akhya Mitchell, who’ll be a junior on next season’s team. “It’s been really helpful for our team.”

The Lady Tigers won seven games last season, and that was a dramatic improvement after they won four games the previous two seasons combined.

It could have been a lot better, though, if not for some bad breaks.

“We started off the season with so much promise, but so many things happened,” Troup coach Carla Thornton said. “I lost one girl at the beginning to Hope Academy. One tore her ACL, another starter was ineligible after the second half. I had all my pieces there, and then I didn’t have them together.”

There were plenty of bright spots, though, including Mitchell, who had a standout sophomore season.

In Troup’s final game, a loss to Woodward Academy in the region tournament, Mitchell and fellow sophomore Kwyneshia Spence were the leading scorers.

Only one player from last season’s team, senior Daushanique Sanders, won’t be returning, and Thornton believes everything the team went through last season will pay dividends.

“Things happen for a reason,” Thornton said. “That was a great learning experience. It taught me a lot, that’s for sure.”

The one player the team is losing is a key one.

Sanders was a key contributor on the team for four seasons, and she was oftentimes the leading scorer last season.

With everyone else coming back, though, Mitchell said the future is bright.

“We only lost one person, so we’re ready,” Mitchell said. “We’re still a young team, but we’ve been together. We’ve got a lot of talent.”

Mitchell said spending the time together during the summer helps.

“We’re such a young team,” she said. “Doing this summer thing, we’ll be better during the season.”

Thornton said she’s grateful for the dedication of the players.

“They’re all committed, and I appreciate them,” Thornton said. “They’re the reason why I do it.”