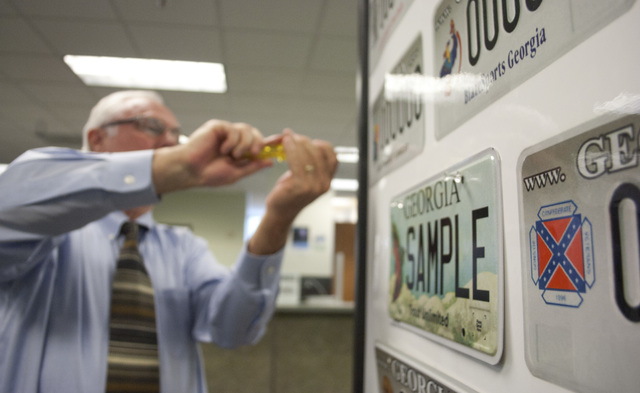 Troup Tax Commissioner Gary S. Wood removes a display featuring a Sons of Confederate Veterans specialty license plate Wednesday at the government center on Ridley Avenue. Wood will no longer display a Confederate flag in his office, but will continue to issue the tags on request, as required by state law.

LaGRANGE — Troup County Tax Commissioner Gary S. Wood said Wednesday he’s not much concerned with being “politically correct,” but wants to be correct.

He removed Wednesday a long-standing display of sample license plates that – among many samples – included a Confederate flag. The display is gone, but Wood said he will still sell the Sons of Confederate Veterans tags on request.

“In the wake of all that has happened in our country, I felt that removing the Confederate license plate would make for a more comfortable visit to the tag office,” Wood said. “I also wanted to show support for LaGrange and Troup County’s initiative toward a race reconciliation program.”

Wood, a four-term tax commissioner and LaGrange native, was referencing a mass shooting at a historically black Charleston, South Carolina, church earlier this month in which nine people were shot to death, allegedly by a self-proclaimed white supremacist. After the suspected shooter was arrested, online photos surfaced of him posing with guns and Confederate flags.

“I’ve been thinking about (removing) it (the Confederate display) since the Charleston shooting,” he said. “We’ve all been seeing what’s been going on – for all of this year, it seems like – but when that happened, seeing the display of the Confederate flag by that young man, it just made me –” Wood stopped and winced, reflecting on what happened in Charleston.

He’s not alone in removing the former Confederate battle flag. Across the nation, politicians and political activists have called for the symbol to be taken down from state houses and other public places. Officials at Walmart, the county’s leading retailer, said they’ll no longer sell the flag in their stores.

In neighboring Alabama, Gov. Robert Bentley ordered the immediate removal Wednesday of four different Confederate banners, including the battle flag, from an 88-foot-tall memorial that stands at the Capitol entrance nearest the governor’s office. Jefferson Davis, the lone president of the Confederacy, is said to have laid the cornerstone at a ceremony in 1886. Two nearby public high schools, now with nearly all-black student bodies, are named for Davis and Confederate commander Robert E. Lee.

In South Carolina, Lawmakers took the initial steps Tuesday toward removing the Confederate battle flag from the Statehouse grounds, a day after Republican Gov. Nikki Haley reversed course and called for the symbol to come down. The flag has flown in front of the state Capitol for 15 years after being moved from atop the Statehouse dome. The momentum in South Carolina sparked further calls from politicians across the state and country for the Confederate flag and symbols to be removed from public displays in other states.

It is Wood’s understanding that Georgia Gov. Nathan Deal is requesting to have the Sons of Confederate Veterans license plate redesigned. He said the removal of the display isn’t meant to offend anyone, nor disrespect the heritage of the Deep South, but he felt the flag now belongs in a museum.

“It’s not to show lack of compassion for the Sons of Confederates,” he said. “But I see it serving no benefit at this particular time in our history.”

Wood said his office is committed to providing professional, courteous service to all the residents of Troup County and that while he’s required to sell the Sons of Confederate Veterans license plate, he doesn’t have to display it.