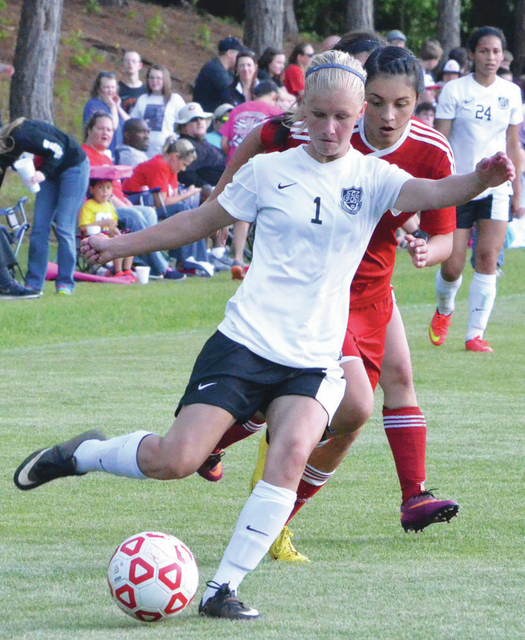 They got their fill of soccer this week.

Four members of the Callaway High girls’ soccer team were in Athens this week for a camp put on by University of Georgia soccer coach Billy Lesesne.

The camp kicked off on Sunday and wrapped up on Wednesday, and it was a busy time for the players.

The days included lengthy training sessions and scrimmage games, all under the direction of coaches from Georgia and other schools across the country.

“It was a great experience, and it was really cool that it was at Georgia,” Frankie Pruett said.

The campers arrived on Sunday and they got right to work, and Monday and Tuesday were both full days.

“We’d wake up in the morning (at 7 a.m.), and we’d go to a training session, which was like two hours,” Pruett said. “And then we’d go to lunch, and we went to a three-hour session after that. And then after that, we’d go to dinner.”

After the dinner, Pruett said “we’d get a break for about an hour, and we’d have to meet back up and we’d go play our game.”

The four Callaway players teamed up with a handful of players from other schools, and they played scrimmage games on Monday and Tuesday.

On Wednesday, the players were divided up into smaller teams, and they played a five-on-five tournament.

“My team made it to the semifinals,” Pruett said. “We lost pretty bad, though. Their team was kind of stacked. They were good. It was fun to play against them.”

Pruett said one of the highlights of the camp was the chance to spend time in the dining area with some of the athletes at Georgia.

“It was really cool,” Pruett said. “We got to eat at their dining hall during lunch.”

During one of the lunches, Pruett and the other players spotted a familiar face, former Callaway football standout Terry Godwin, who is preparing for his freshman season with the Bulldogs.

“Acia, who was with us, noticed Terry Godwin sitting over at the table,” Pruett said. “He waved to us, and he came over and sat with us and talked with us for a minute. That was great.”

The four Callaway players were part of an extremely successful team this spring.

The Lady Cavaliers finished second in Region 5-AAA to earn the right to host a state-tournament game, and they lost to Lakeview Fort-Oglethorpe in the first round.

There was only one senior on that team, so the Lady Cavaliers should be poised for a lot of success next year.

Pruett believes the camp experience will be beneficial for the Callaway players.

“A lot of the stuff we were talking about was stuff we already knew,” Pruett said. “But we found what we were strong, and not strong at. At the end, they gave us an evaluation sheet, and it scored us from one to five on what we were best at. We can use that to help us push ourselves to play better.”