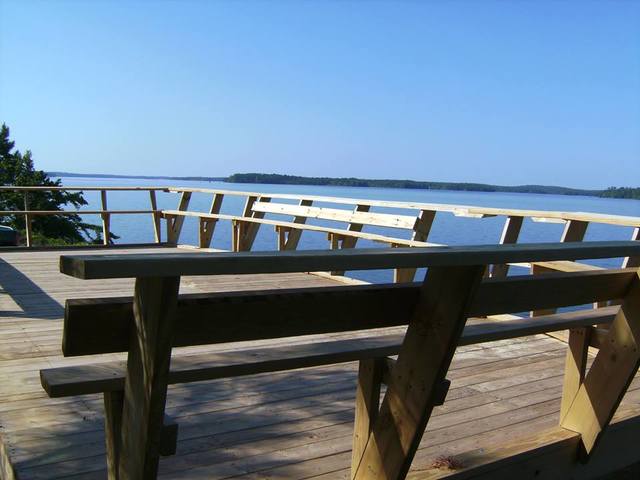 Some scorched dirt and a few pieces of wood mark where a U.S. Army Corps of Engineers observation deck burned Wednesday morning at West Point Lake. The Troup County Fire Department is investigating what caused the fire. An undated photo shows the observation deck prior to burning early Wednesday morning. The deck was built in 2008 as a service project by the Troup High School Future Farmers of America club.

WEST POINT — The Troup County Fire Department is investigating the cause of a fire that burned a U.S. Army Corps of Engineers observation deck on West Point Lake early Wednesday morning.

By the time firefighters were able to respond to the call, the deck was completely engulfed in flames. None of it was able to be salvaged.

“At this time, we don’t know exactly what caused the fire,” said Deputy Chief Fire Marshal Kevin Norred of the TCFD. “It may have been accidental, or it may have been intentional. We haven’t found any evidence to suggest that someone set it on fire intentionally.”

The deck was located on a wooded hill overlooking a bank on West Point Lake behind the Army Corps of Engineers’ Project Management Office and Visitors Center at 500 Resource Management Drive. It was originally constructed in Spring 2008 to serve as an observation area for visitors to view birds, specifically osprey and bald eagles.

“We hope it was not done intentionally, and we can’t think of a reason why anyone would have set it on fire,” said David Barr, supervisory park ranger for the Army Corp of Engineers. “We know that a lot of people will come out in boats and camp along the banks and build fires, but we didn’t see any evidence that this was what started the fire.”

The observation deck was constructed by students from Troup High School’s Future Farmers of America program. The deck was part of a $10,000 “handshake” fund project for the Avian Habitat Improvement Project, which was started to create awareness and provide visitors an educational about birds around the lake, Barr said.

The project included the construction of a nature trail with interpretive signs, foot bridges, picnic tables and benches and observation deck were part of the project. According to Barr, the cost of the deck alone was about $2,500.

“It looks like it was a slow burn,” said Norred. “Something set it on fire, we just don’t know what did.”

Barr said that the Army Corp of Engineers have plans to rebuild the deck. The Troup County Fire Department is asking anyone with information about what may have caused the fire to contact its non-emergency number at 706-883-1717.