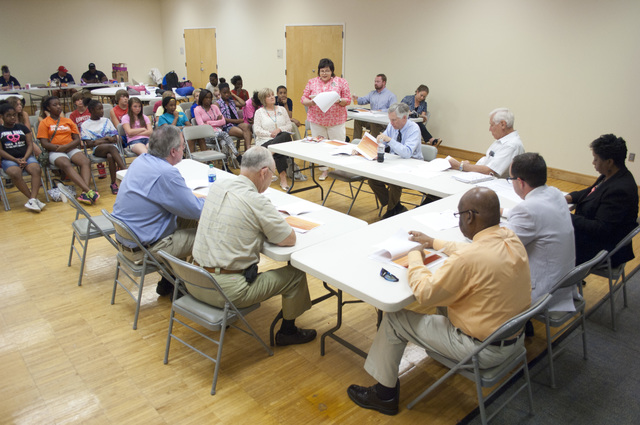 LaGrange City Council members hear a budget presentation from Paige Estes, president of the LaGrange-Troup County Chamber of Commerce on Tuesday during a council work session at the Mike Daniel Recreation Center on Lafayette Parkway.

Page Estes, president of the chamber, spoke to council members about progress it has made over the past year, as well as its upcoming goals and objectives. She presented a proposed budget for the 2016 fiscal year that included a total expected income of $580,000, which would be an increase from the $500,000 collected in 2015. The chamber’s total expenses for the upcoming year’s proposed budget is $888,765, with over $100,000 being added to the chamber’s cash reserve.

The chamber has begun an ad campaign which has been featured in Southern Living magazine. Estes said the magazine ad is part of a campaign that includes emails, social media posts, as well as the chamber’s new tourism website.

“We are proud to announce the unveiling of our new website, which is intended to promote tourism in LaGrange and Troup County,” said Estes. “We have the landing page completed and will be adding to the different sections in the near future.”

The website, www.visitlagrange.com, was constructed with the help of Kelsey Advertising & Design, a marketing firm located in downtown LaGrange. The site offers visitors a glimpse of local art and architecture, as well as eateries and shopping destinations.

“There’s a little something for everyone here in Troup County,” said Estes. “We hope the website will encourage people from the surrounding area, and even from many miles away, to come see some of our attractions.”

According to the Georgia Department of Economic Development, Troup County’s tourism industry provided 1,160 jobs and generated $151 million in direct tourist spending. The GDED also reported that Troup County tourism created more than $5 million in state tax revenue and also provided each household in the county with $378.20 in tax relief.

“We have a some strong attractions here in Troup County, especially West Point Lake,” said Estes. “Our local sporting events and programs also draw a considerable amount of income.”

Estes said the chamber hopes to work alongside LaGrange College in hosting triathlons and other sporting events that will bring in visitors from a wide area. According to the proposed budget report, the chamber expects to bring in $195,000 of income from sporting events and programs, which is two times the number that was budgeted in the previous fiscal year.

“There are two major sporting events that we have placed bids on in hopes that we do get them to come here,” said Estes. “We’re hopeful that we will get them, but if we don’t, then we will adjust the number of expected income accordingly.”

The chamber hopes to draw in visitors to LaGrange and Troup County in overnight stays that will lead tourists to explore many aspects of the local tourist market. According the U.S. Travel Association, tourism in LaGrange is expected to experience moderate growth from now until the end of 2016.