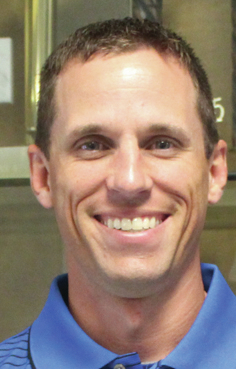 The Troup Tigers have been working hard this summer as they prepare for a new season that begins on Aug. 28. Kevin Eckleberry | Daily News He’s been on the job nearly two months, and Tanner Glisson likes what he’s seen.

Glisson was hired as Troup’s head football coach in early May, and he’s been a busy man since then.

He has not only had to get to know his new players, but he also had to put together a coaching staff.

Everything is falling into place, and the Tigers are in the midst of their summer schedule.

This week has been a particularly busy one for the Tigers, who had seven-on-seven competitions at Heard County on Thursday and at East Coweta on Tuesday.

Earlier this summer, Troup threw at St. Pius, and it participated in a seven-on-seven tournament at the University of Georgia.

“It’s gone good,” Glisson said. “We’re so far behind the game. We’re just trying to play catch up, trying to get things installed offensively and defensively.”

Glisson said “the kids are working hard, and they’re real enthused. We’ve got good numbers. We’ve got over 100 kids coming every day, so that’s good for us. And the coaches get to know each other’s coaching styles. We’re trying to bring all that together.”

One of the coaches Glisson has brought in is Kelby Holt, who will be Troup’s offensive coordinator.

Glisson is also relying heavily on Lynn Kendall, who was the head coach for the previous three seasons and has remained on staff.

“Kelby Holt our OC has done a great job with that offense,” Glisson said. “And Lynn Kendall is working on the defensive side of the ball, and he’s really brought a lot to the table, too, as far as showing us the ropes and the terrain around here.”

One of the first things Troup did this summer was go to the seven-on-seven tournament at Georgia.

There wasn’t a whole lot of time to prepare, but Glisson said it was a valuable experience.

“They competed,” Glisson said. “We threw that together in like three days. We went up there and played about six or seven games. We just went up there and tried to coach on the run a little bit. I think they enjoyed the experience. Anytime you have Mark Richt looking over your shoulder, you up your game to a different level.”

The seven-on-sevens have given Holt a chance to get a close look at the skill players, including the players who are vying to be the quarterback.

Will Smith was Troup’s starting quarterback for most of the past three seasons, but he has graduated, so somebody new will be under center when the season kicks off on Aug. 28.

Holt said Montez Crowe, Ken Truitt and Dexter Shealey have been taking the snaps this summer.

“We’ve got good competition,” Holt said. “They all bring good things to the table. They’re competing, and that’s the biggest thing.”

Troup’s players will be off next week for the Georgia High School Association-mandated dead week.

The Tigers will get back to work the following week, and preseason practice will kick off at the end of July.

Troup opens its season on Aug. 28 against LaGrange.

It’s a busy month for Cavaliers