Troup County volunteers give the gift of reading 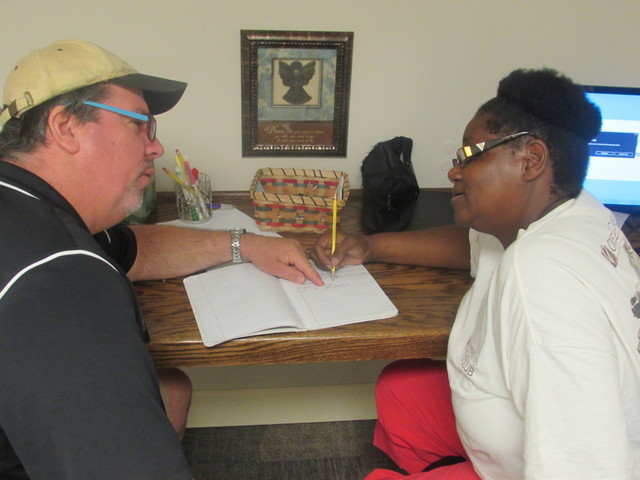 Rene Wolfe, left, goes over a special booklet she created for her student Hattie Williams. Wolfe tutors Williams at least once a week for two hours in reading and writing. In the two years Williams has worked with Wolfe she has learned to read her Bible and the newspaper, plus put out a yearly newsletter for her family. Charlie Frear, left, helps Shairl Davidson with her writing during their tutoring session at the Literacy Volunteers of Troup County.

LaGRANGE — Hattie Smith never had the opportunity to go to school growing up. Now, as an older adult, she is learning the basics – skills that most people may have learned in elementary or middle school.

“She learned how to use the guide words in a dictionary,” explained Rene Wolfe, Williams’ tutor. “I stress to her if she comes across a word she doesn’t know to look it up in the dictionary.”

Wolfe and Williams are a part of the Literacy Volunteers of Troup County, a United Way organization that provides free tutoring for adults who need help in subjects such as math, reading, writing, computer skills and English as a second language.

“We want to improve the lives of those with low literacy,” explained Karen McClain, office manager and recruiter for the Literacy Volunteers of Troup County. “We want to help people achieve major goals or those who may want to join the workforce.”

McClain said they get a lot of referrals from the Department of Labor. Some folks just want to get their GED and others want to learn how to create a resume or even fill out a job application online.

Tutors work one-on-one with their students at least once a week, anywhere from one to two hours per day.

“We see our students do better one on one … and it’s all very confidential,” McClain explained. “But we’re all very supportive. We let them know ‘You’re not in this alone.’”

McClain said the last figures they had showed 8,000 people just in the city limits of LaGrange were low literate.

Many of their clients are from other countries and want to learn the English language, she noted.

It is one of the reasons McClain said the organization is in desperate need for more tutors – especially for English to speakers of other languages, commonly referred to as ESOL.

Right now literacy group has 18 active tutors and so far has accepted 52 applications in 2015. In 2014, McClain said they acquired 59 applications the entire year.

To meet the demand this year, McClain said some tutors are coming in twice week to work with different students one on one.

“It makes such a difference in people’s lives,” said McClain. “Our tutors develop relationships with these students … we had one tutor help a gentleman learn to read and find a job.”

McClain said one of their students was receiving mail she did not understand. She brought it to her tutor, who discovered the woman was a victim of identity fraud. McClain said the tutor worked with his student until the matter was cleared up.

It is that kind of patience and heart that McClain said she is looking for more of in the program.

Wolfe is a retired middle school teacher who wanted to get involved in a program where she could still help people improve themselves. Literacy Volunteers of Troup County has given her that outlet. She has tutored Williams now for more than two years.

Wolfe said Williams was the first student to complete the reading program.

“We are also working on her writing,” explained Wolfe. “Working on speech nouns, pronouns, verbs, words that are confusing like to, two and too. She’s also going to be writing short essays and stories. She has come so far … now she does a newsletter every year for her family at Christmas.”

“Now I can go back and read the newspaper better and understand it,” Williams said proudly. “Now I can read my Bible … I didn’t get a chance to fulfill my education, but now I don’t feel left behind.”

Anyone interested in becoming a tutor, learning more information or making a donation to Literacy Volunteers of Troup County can call Karen McClain at 706-883-7837.