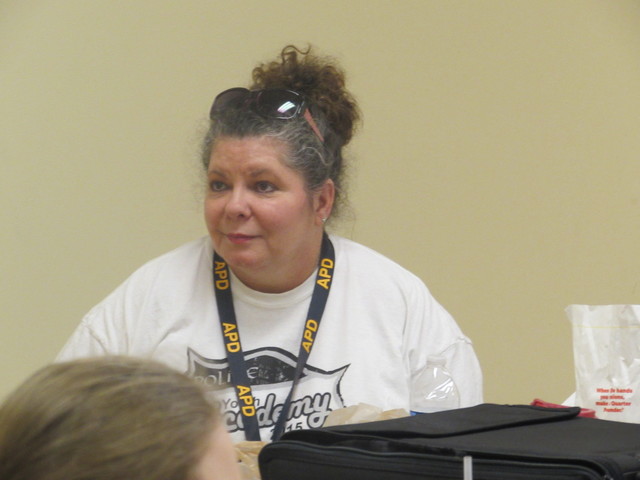 Carson Tarwater, 13, and fellow campers hold up a sign they made showing their symbol for “team work.” That word was also this year’s theme of the 25th annual LaGrange Youth Police and Fire camp. Camper Kaliyah Brown, 12, listens to different ways to protect herself and her family during a presentation from the LaGrange Fire Department. Lt. Chris Taylor with the LaGrange Fire Department shows the campers some catchy tunes and moves to help them remember what to do should a fire break out in their house. LaGrange police officer Natalie McKinley runs the LaGrange Youth Police and Fire camp. She said hopes the campers take away life-saving skills, knowledge about each department and job opportunities, plus learn more about law enforcement officers as people, not just folks with a uniform and a badge.

Some Troup County kids spent their summer camp under the constant supervision of local police officers at the Mike Daniel Recreational Center on Lafayette Parkway – but not in a bad way.

The officers and LaGrange firefighters are taking these children under their wing for a week and showing them the ropes for the 25th annual LaGrange Youth Police and Fire camp.

The camp was split up by age groups. The first week, camp organizer Natalie McKinley said they hosted 55 children aged 7 to 11 years old. This week, she said the camp had 30 students aged 12 to 16 years old. Both sessions also included children who may have special needs.

McKinley is a patrol officer with LaGrange Police Department and also a full-time Drug Abuse Resistance Education, or DARE, officer during the school year in the Troup County School System.

She said this year’s theme was “team work.”

“We had them work together as a team, had team competitions in a relay-type fashion … field day activities. They seemed to enjoy that. They’re still very competitive,” said McKinley.

McKinley said while the campers spent the week swimming and playing, they also spent time in the classroom talking about fire safety, gun safety, computer safety, bullying and more. The kids also had a visit from LPD’s K-9 unit, crisis negotiation van and members of the LaGrange City Council, who held their meeting out at the center Tuesday.

The campers also visited the municipal courthouse, police department and one of the LaGrange Fire Department stations to tour the facilities and learn about the different jobs within each department.

While at the fire station, firefighters taught campers how to use a fire extinguisher and how to get out of a burning house safely.

“I learned about a lot of fire safety, a lot about the K-9, and I learned a lot about leadership,” said camper Carson Tarwater, 13.

“If you have a fire in your house, you should try and get out,” explained camper Kaliyah Brown, 12.

McKinley said the camp was a chance to re-teach children lifesaving skills, but also take away some of the “mystery” of the folks behind the badge.

“I hope they see us outside the uniform, that we are someone they can call on and won’t be scared to do it,” she explained. “They see behind the badge and hopefully, they see a friend.”