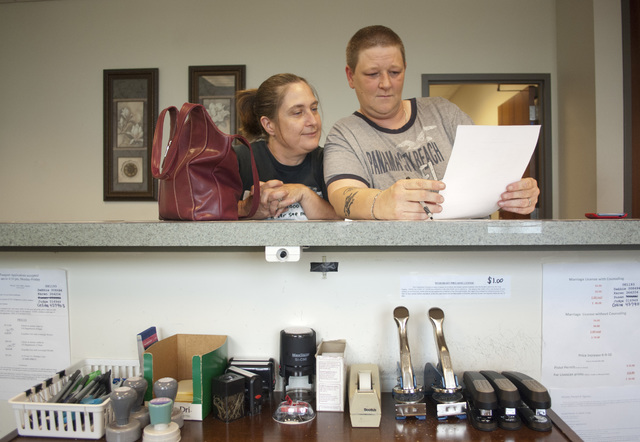 Tracie Williamson, right, of LaGrange, inspects a marriage license form with her partner Kathy Deloach of LaGrange on Friday afternoon at the Troup County Probate Court office in LaGrange. Williamson and Deloach were the first same-sex couple to apply for a marriage license in Troup following Friday’s U.S. Supreme Court’s ruling in favor of same-sex marriage nationwide.

Tracie Williamson and her partner Kathy Deloach, both of LaGrange, on Friday became the first same-sex couple to receive a marriage license in Troup. They received their license at about 2:30 p.m. at the Troup County Government Center on Ridley Avenue, just hours after the high court released its ruling.

“I think it’s cool,” Williamson said after receiving the license. “This way we can show the people of Troup County, ‘come on up here and get what you have a right to.’ I always wanted to be the first at something and this was our chance.”

While the probate court is issuing marriage licenses, Probate Judge Donald Boyd announced recently he is no longer officiating weddings; however, any judge in Georgia is qualified to perform a civil marriage.

Williamson, a life-long resident of LaGrange and a 1990 graduate of Troup High School, said when she was growing up, she felt like she wasn’t being true to herself or her family by hiding her sexual orientation.

“It was like a big secret,” she said. “I had a sister, and she dated and people would always ask why I didn’t date. My family would say I was too busy playing softball or working, that was the excuse why I didn’t date anybody.”

After her sister was killed in a car wreck, Williamson decided to marry a man. They were wed in July of 1990, but divorced soon after.

“(He) was a great guy, but I wasn’t happy and I know I made him miserable,” she said. After her divorce, Williamson had a daughter, Barbie.

In 1999, Williamson decided to tell her family and friends she was a lesbian after she met and fell in love with a woman named Patti.

“She was my soul mate. It’s hard to explain how she was, but she was everything to me,” Williamson said. “We were just meant to be together and then I lost her August 4, 2002. She had a massive heart attack.”

Williamson said after she was open and honest with her family about her sexuality, they supported her and loved her the same as before.

“My daughter and all my family are 100 percent backing us up,” she said. “I have an aunt that’s 73 and she wants us to (get married) where she can see us. She’s always been my biggest supporter.”

Williamson and Deloach actually were wed in Alabama earlier this year — but much of her family wasn’t able to travel the distance to attend the wedding. That’s why the couple is having another wedding in LaGrange so that family and friends can attend. Williamson said she wanted to have her wedding in the place she grew up.

Both Williamson and Deloach know that not everyone will agree with their union, or the Supreme Court’s decision to overturn same-sex marriage bans nationwide. Still, they believe it is their right.

“I don’t judge anybody, and I know there’s a lot of people who will criticize this, but I’m not mad at them,” Williamson said. “But it’s not going to change anything. The world isn’t going to turn dark at midnight and never get bright again. It’s just allowing people to be happy and be who they are. That’s what America’s supposed to be: Home of the Free.

“For all these years, all these gay couples have been put down and shunned,” she continued. “They haven’t had their rights, all because of one single piece of paper.”

From the Supreme Court’s standpoint, Justice Anthony Kennedy’s majority opinion was clear and firm: “The court now holds that same-sex couples may exercise the fundamental right to marry. No longer may this liberty be denied to them.”

The ruling put an end to same-sex marriage bans in the 14 states that still maintained them, and provided an exclamation point for breathtaking changes in the nation’s social norms in recent years. As recently as last October, just over one-third of the states permitted gay marriages.

Kennedy’s reading of the ruling elicited tears in the courtroom, euphoria outside and the immediate issuance of marriage licenses to same-sex couples in county offices in Georgia and Texas. In Dallas, Kenneth Denson said he and Gabriel Mendez had been legally married in 2013 in California but “we’re Texans; we want to get married in Texas.”

Four of the court’s justices weren’t cheering. The dissenters accused their colleagues of usurping power that belongs to the states and to voters, and short-circuiting a national debate about same-sex marriage.

“This court is not a legislature. Whether same-sex marriage is a good idea should be of no concern to us,” Chief Justice John Roberts wrote in dissent. Roberts read a summary of his dissent from the bench, the first time he has done so in nearly 10 years as chief justice.

“If you are among the many Americans — of whatever sexual orientation — who favor expanding same-sex marriage, by all means celebrate today’s decision,” Roberts said. “But do not celebrate the Constitution. It had nothing to do with it.”

There are an estimated 390,000 married same-sex couples in the United States, according to UCLA’s Williams Institute, which tracks the demographics of gay and lesbian Americans. Another 70,000 couples living in states that do not currently permit them to wed would get married in the next three years, the institute says. Roughly 1 million same-sex couples, married and unmarried, live together in the United States, the institute says.