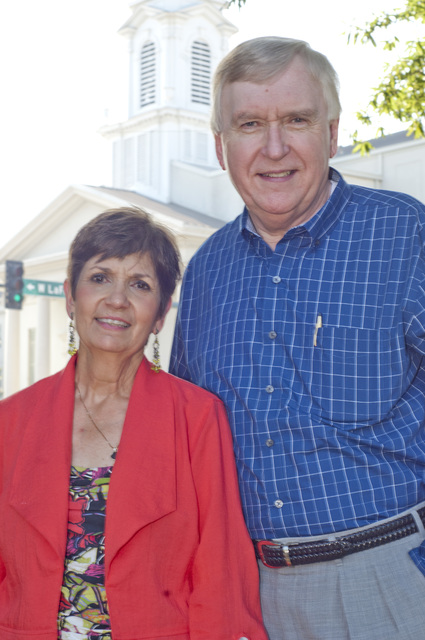 The Rev. Paul Baxter, a British-born pastor who retired from First Baptist Church on the Square this month, never did quite shake his proper English accent.

Still, there’s a slight, yet distinct Southern twang in his voice when he describes moving from London as a teenager to East Tennessee – or “Tannessee,” as he pronounces it.

“I didn’t feel comfortable initially in the school or the community because I was different,” Baxter said. “My next older brother deliberately gave up his accent because he was teased, really mercilessly (at school).

“My father took an early retirement at age 57 and we moved from a suburb of London to the mountains of East Tennessee. My sister lived there, she’d married an American (service member) who was stationed in England … It was a bit of a culture shock to go from a city of 10 million people to town of 8,000.”

Relocating from one of the world’s largest cities to a mountain town in Tennessee was a challenge, Baxter said, but in typical British fashion, his family kept a stiff upper lip and calmly carried on until finding an unexpected place in the community.

That connection between the Baxter family and their new-found spiritual home grew over the years. Baxter’s father sang in the choir and the whole family was active in the church.

“It was a good experience in two ways,” he said of the church. “One, there were a lot of wonderful people, and second I learned what it was like to be an outsider. I was different, I had a different accent and came from a different area. That’s why we became Baptists.”

After settling in Irwin, Tennessee, Baxter graduated high school and attended the University of Georgia on a debate scholarship where he studied Russian culture.

“I wasn’t planning to be a minister,” he said. “I wanted to either teach history or go into law, because I was in the debate team. I didn’t really want to become a pastor.”

Still, something attracted Baxter to his faith and church. After graduating UGA in 1970, he attended Yale University in New Haven, Connecticut, where he graduated with a master’s degree in divinity in 1973.

“I chose to go to Yale because I thought that would be very challenging, and most students at Yale Divinity School are either Methodist, Lutheran or Episcopalian,” he said. “There were very few Baptists, and that’s where I discovered and reaffirmed that I was a Baptist.”

His education didn’t end with the Ivy League university in Connecticut, though. He enrolled in a doctoral program at Southern Baptist Theological Seminary in Lexington, Kentucky, where he studied apologetics before graduating in 1977.

“(Apologetics) comes from the Greek work ‘apologia,’ which basically means to defend and to commend or recommend something,” he said. “So, as a Christian, I need to be able to defend, as well as recommend what I believe. That means I need to answer the tough questions.”

Baxter has continued his work in apologetics throughout his career, he said. He writes on the subject for a Southern Baptist news publication – something he’s done for years and plans to continue to do in his retirement.

After graduating with his doctoral degree, Baxter pastored churches in Ohio and Atlanta before coming to First Baptist Church on the Square in 1983.

“A pastor and a church are like a marriage,” Baxter said. “Sometimes it works and sometimes it doesn’t work as well. I was blessed and really fortunate to have a really gracious, kind, mission-minded, Biblical congregation. We shared the same kind of beliefs.”

Baxter said First Baptist Church on the Square’s commitment to outreach and missionary work was a good fit for him, personally.

“I believe very strongly that sin, at its core, is based in self-centeredness,” he said. “If a church focuses on itself, how can you expect people not to be self-centered? Our church just has a tremendous history of supporting missions and doing things in the community and around the world.”

In fact, he noted, the church spends roughly a third of its budget on missionary work.

Not only were the church’s mission and values a perfect pairing for Baxter, the people of the church is one of the things he loved most during his 32-year tenure as pastor.

“I think LaGrange has a very welcoming atmosphere,” he said. “To me, that’s what a church should be, like it was for us in Tennessee. What attracted me to stay here was really the warm, gracious, kind and loving people. We also made a commitment to provide the best children’s ministry. We started a day care center, a mother’s morning out program, we have a host of children’s ministries and we’re committed to having an active youth ministry.”

Children’s ministries weren’t the only thing Baxter helped create during his time at First Baptist Church on the Square.

“First, we needed an activities area,” he said. “For us, it was the Christian Family Life Center. It’s very nice. We started working on it as soon as I got here. They’d wanted to do it for years and years. It pre-dated me and I just helped. I think we finished it in 1987.

“Then, we just outgrew the sanctuary and we tried remodeling it, but that just didn’t work. So, we removed it and rebuilt it. We incorporated the same stained glass and a chandelier, and we even kept some of the old bricks that dated back to 1856. That was around 1996. Then we had to add Sunday school space and more children’s area. That was after the millennium, 2004 or 2005.”

In the background of all of his accomplishments, Baxter’s wife, Joanna, a retired special education teacher, stood by his side and worked alongside him to grow the congregation. She’s been an active participant in the church’s day care program and also volunteers at Hills and Dales Estate as a docent. The couple has two adult daughters, Paula, a pediatrician in Birmingham, Alabama, and Sarah, a business manager for the Milliken textile company in Spartanburg, South Carolina.

As he moves into the next phase of his life, Baxter said he hopes the congregation knows how much he loved his time there.

“I think they know that I’ve enjoyed being their pastor and loved being a part of the church and the community,” he said. “I love pastoring more than I do teaching or preaching.”

In his retirement, he’ll still be doing some of that pastoring, preaching and teaching, he said.

On his first Sunday away from First Baptist Church on the Square, he preached at a church in Pine Mountain as a guest. The following weekend, he was a guest speaker at a church in Dalton and officiated a wedding.

After all, when a person loves their job, it’s hard to stay away.