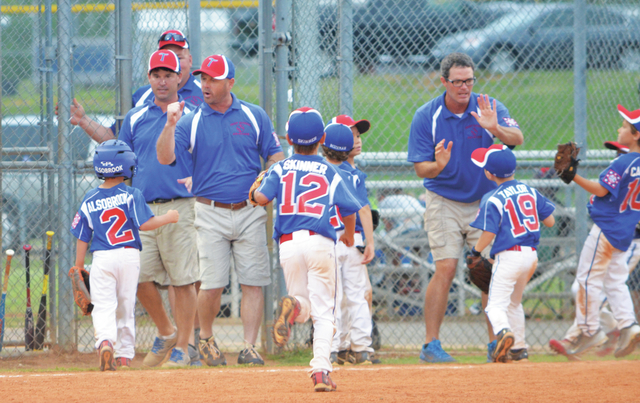 The Hogansville all-star team was eliminated from the district tournament, but it will still play in the state tournament next weekend. Kevin Eckleberry | Daily News MANCHESTER – After a tough opening game in the Dixie Youth Baseball 7-8-year-old district tournament on Friday, the Troup National all-star team was looking for a bounceback performance in its second game.

Troup National posted an impressive 19-3 victory over Hogansville to remain alive in the double-elimination tournament.

Troup will face Manchester at 10 a.m. today, and the winner of that game will play Thomaston at noon.

Troup would need to beat Thomaston again at 2 p.m. to capture the championship.

In its tournament opener on Friday, nothing went right for Troup National in a 15-0 loss to Thomaston.

The second game was a much different story, with Troup scoring at least three runs in every inning on the way to the win.

Hogansville lost its first game to Manchester 14-11, and it was eliminated with its loss to Troup County.

“You could see the jitters in that first game,” Troup National coach Rusty Taylor said. “Their eyes were so wide. They were scared to death in that first game. We were real proud of the way they came back in this game and fought hard.”

Troup took a 3-0 lead in the first inning, with Landon Alsobrook, Jackson Bozeman and Luke Taylor each coming through with base hits.

Troup scored five runs in the second inning, and Noah Black, Avery Bartlett, Lashun Gates, Kaleb White and Bozeman each had base hits, and Alsobrook had a two-run triple.

In a four-run third inning, Alsobrook, Rob Skinner, Kayden Sutton and Taylor each had hits.

Hogansville scored its three runs in the bottom of the fourth.

Troup capped the scoring with seven runs in the top of the fifth.

After Kaden Carlisle and Black reached on base hits, Bartlett, Gates and White had consecutive RBI singles.

Skinner capped the scoring with an inside-the-park home run.