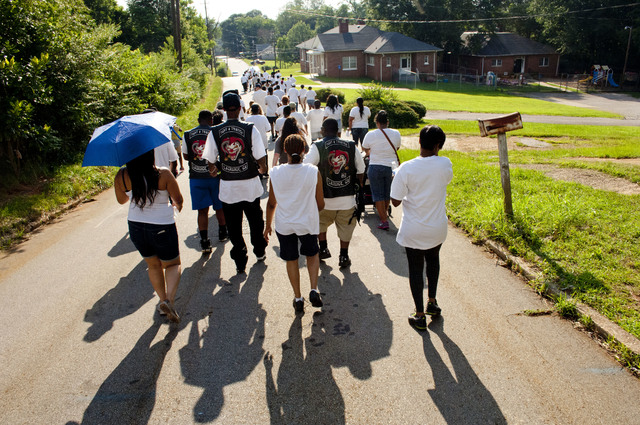 Donny Karr | Daily News Area residents demonstrate for peace during a March on Sunday in LaGrange. Donny Karr | Daily News Area residents demonstrate for peace during a March on Sunday in LaGrange.

By Donny Karr dkarr@civitasmedia.com LaGRANGE — The Unity Group held its second march for peace on Sunday through the streets of the east side of LaGrange. The march was aimed at raising awareness for the need to positively influence the city’s youth in order to help bring an end to violence on LaGrange’s streets, organizers said. “We’re headed in the right direction, even though we’re still in the early process of forming our efforts,” said David Simpson, a LaGrange native who joined with others to organize the event. “We’re just building the foundation first, and I think people are starting to take notice of what we’re doing.” Simpson organized the event with the help of friend Nate Newton, a fellow barber who owns Razor Cutz Barbershop. Both Simpson and Newton said that the Unity Group’s mission has been misunderstood as one that specifically targets certain issues in LaGrange. “Our mission is simple, we want to unify our community for the greater good,” said Simpson. “This is not about racial divides, and it’s not about gangs. It’s about bringing everyone together to eliminate all kinds of obstacles the people of LaGrange face. We’re here to encourage everyone to live in peace with one another so we can inspire our youth to do good things for their community.” Marchers began at the Niles Street park and made a round through the Lucy Morgan Housing Complex before ending at Union Street Park at Whitesville, Fannin and Union streets. During that march, participants chanted slogans that brought residents out of their homes, with some people cheering in support of the effort. Some residents joined in with those in the march, who could be heard chanting in unison “L.I.P. — Live in Peace.” After the march, participants joined one another in singing songs about peace and unity. One local pastor gave a heartfelt prayer on behalf of the Unity Group and the people of LaGrange. “We pray for the Holy Spirit to search our community and find where pockets of hate abide, and replace it with love so that true unity can come forth,” said Chalton Askew, pastor of the Church of the King in LaGrange. Organizers introduced an array of local leaders who spoke about various issues that the city is dealing with. Former Georgia House representative Carl Von Epps spoke on the need for people in LaGrange to see each other as brothers and sisters. “We’ve got to come together to love our brothers and sisters, no matter their color or background,” said Von Epps. State Rep. Bob Trammell of local District 132 marched alongside members of the community and also gave closing remarks to the crowd gathered at the park. “When you drop a rock into a lake, you notice that it produces ripples,” said Trammell. “What we’re doing here today is causing positive ripples throughout the city. We all know the story of David and Goliath, where David took a small stone and used it to defeat his nation’s greatest enemy. Even though our effort seems small, it can have great and lasting effects for the greater good of our community.” Donny Karr is a reporter at LaGrange Daily News. He may be reached at 706-884-7311, ext. 2154.