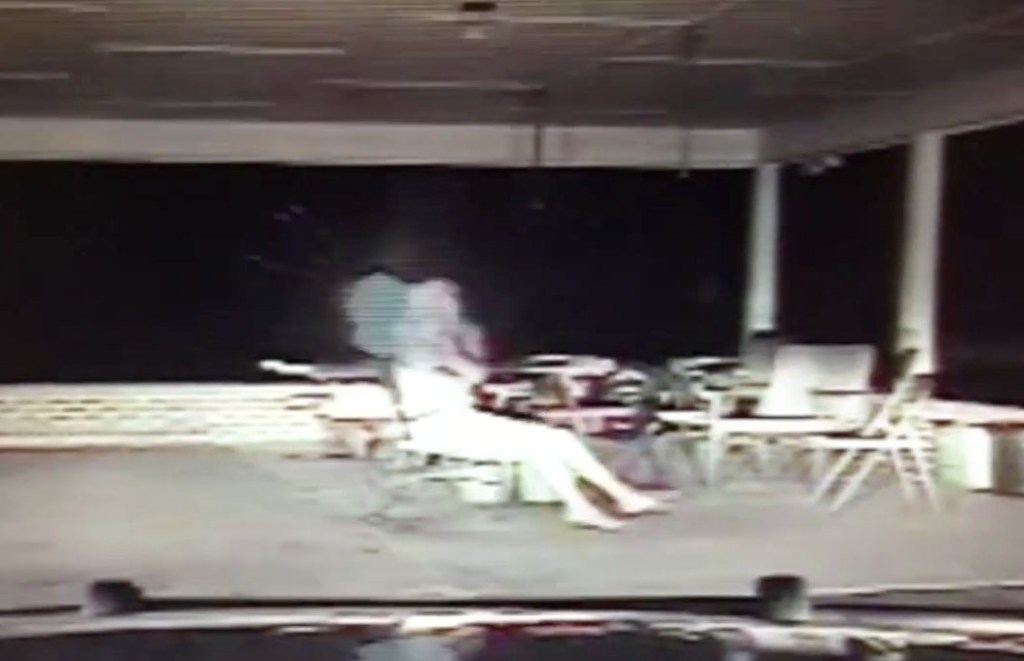 LaGRANGE — The Georgia Bureau of Investigation on Monday released dash-cam video that shows the incident where a deputy exchanged fire with a man in the 3200 block of Hamilton Road shortly after midnight Monday. (To watch the video, click here: Deputy-involved shooting.) A caller to Troup County 911 reported shots fired in the area, which prompted the sheriff’s deputy, identified as Stephen D’Angelo, to respond to the home. The video shows the suspect, identified by the sheriff’s office as Terry Caldwell, 60, sitting in a chair under a car port. The video begins as the deputy’s cruiser pulls up, with Caldwell waving toward the vehicle and then begins pointing his finger. As the audio starts a few seconds in, Caldwell is yelling something indecipherable. D’Angelo tries to talk to Caldwell. “Sir,” D’Angelo says, as Caldwell continues to yell. “Sir! What you got in your hand?” “What?” replies Caldwell. D’Angelo asks again what object Caldwell has with him, and Caldwell continues to yell. A few seconds later he raises the gun, which a GBI press release identified as an AK-47 style pistol, and fires twice to the left of the patrol car. Four shots then can be heard, which Sheriff James Woodruff said was D’Angelo returning fire. Caldwell hunches over for a second and then sits back up. He briefly raises the gun again as D’Angelo continues to yell at him to “put the gun down now.” Caldwell then complies and lays down the gun. D’Angelo then calls for service and reports shots fired. Caldwell sits laid back in the chair, appearing almost calm, and even reaches over to a table to pick up what sheriff’s investigators confirmed was a beer and takes a drink of it. He then picks up another object, which investigators said was an e-cigarette – also known as a vaporizer – and D’Angelo again yells at him, asking what he has in his hand. After Caldwell holds up the object and replies, D’Angelo realizes the object is an e-cigarette, which Caldwell then puts to his mouth, exhales vapor and puts back down. Caldwell continues to sit in the chair as D’Angelo speaks into the radio. Caldwell at one point again picks up the beer, causing D’Angelo to tell him to “show me your hands,” which Caldwell raises and puts down the beer. “Do not reach for anything!” D’Angelo tells him. Caldwell replies with something that sounds like, “I ain’t doing nothing!” The video ends shortly after with Caldwell still holding his hands in the air. Caldwell was later flown to Grady Memorial Hospital in Atlanta for treatment. He was struck by two bullets fired by D’Angelo, Woodruff told the Daily News on Monday, one going through his elbow and into his torso, and another hitting his leg. Caldwell underwent surgery at Grady Memorial Hospital on Monday to remove fragments of bullets that lodged in his elbow and leg, Woodruff told the Daily News this morning. The sheriff also said Caldwell is expected to recover. Warrants have been obtained for Caldwell’s arrest once he is released from the hospital. He will be charged with aggravated assault on a peace officer and possession of a firearm during the commission of a felony, Woodruff said. Caldwell could face up to 25 years in prison if convicted. D’Angelo was uninjured and is on paid administrative leave while the GBI conducts an investigation into the incident, Woodruff said. He has been employed with the sheriff’s office since August 2014. A civilian woman was also in the patrol car as a “ride along,” but was uninjured, according to sheriff’s office officials. The sheriff added that he has suspended the deputy ride-along program pending an review of its policies and procedures. The sheriff’s office and the Georgia State Patrol are providing counseling to the deputy, his family and other officers who responded to the scene after the incident.