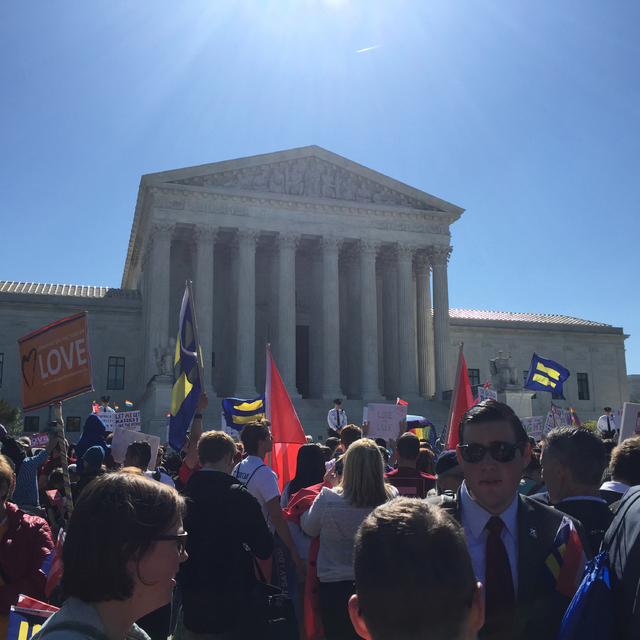 Sean Cockerham | McClatchy DC via Tribune News Service Crowds gather at the Supreme Court in Washington, D.C., on April 28 in anticipation of arguments in the case to determine whether states could ban same-sex marriage. In a 5-4 ruling Friday, the court said states cannot ban same-sex marriage, a decision that was expected but not welcomed by some faith leaders and politicians.

Daniel Malloy and Shelia Poole The Atlanta Journal-Constitution via Tribune News Service ATLANTA (TNS) — A landmark U.S. Supreme Court ruling legalizing same-sex marriage may have changed the law of the land, but it will do little to change the minds of people like the Rev. Jack Lee. “I’m disappointed that they ruled against what I believe is the biblical principle for marriage, which is one man and one woman,” said Lee, pastor of the 700-member Altamaha Baptist Church in Jesup. “As far as our church, we will stay the course of our convictions. Our higher authority is not the Supreme Court, but it is God.” In a 5-4 ruling, the court said states cannot ban same-sex marriage, a decision that was expected but not welcomed by some faith leaders and politicians. Religious bodies are not affected by the ruling and can decide on their own whether to perform same-sex marriages. In a way, they were swimming against a cultural tide. In recent years, more Americans have become accepting of same-sex marriage. A recent Pew Research Center poll found that support for legalizing gay marriage is at its highest point in nearly two decades. Millennials, in particular, tend to be more accepting of gay marriage. After the decision was handed down, several gay and lesbian couples rushed to courthouses across Georgia to say their “I dos.” It was not a sight that the Rev. Cade Farris wants to witness. Farris, senior pastor of First Baptist Church on the Square in LaGrange, recently moved from a church in Alabama. “This has been on my heart and mind a lot,” he said. “I’m saddened by the ruling from a biblical standpoint.” He said he wouldn’t perform a same-sex marriage nor allow staffers to, whether on or off church premises. If anything, he said, the ruling will make churches clarify their polices and practices and have “more urgency to share the truth about Jesus and Jesus’ teachings.” Pastor Gary Kirkendall of Broad Street Church of Christ in LaGrange is not alone in worrying the ruling could open a Pandora’s box. He said a church’s tax-exempt status could come under scrutiny. “Up until today the states regulated marriage licenses. Now they have to be compliant with federal law,” he said. “With today’s ruling, the Supreme Court decided who’s eligible for marriage. That’s whole new ground. We just have to wait and see.” Some religious leaders struck what appears to be a more conciliatory tone, although they did not stray from their opposition to same-sex marriages. Archbishop Wilton D. Gregory of the Archdiocese of Atlanta called the decision a “deep disappointment for some people and vindication for others.” Politicians also had their say. Most of Georgia’s Republican members of Congress issued statements decrying the ruling, often echoing Rep. Lynn Westmoreland of Coweta County, who accused the five-justice majority of “judicial activism.” “It should be decided by the people of the state through a democratic process; for the 10th amendment guarantees the states and people rights that are not delegated to the federal government by the Constitution,” Westmoreland said. “I will continue to fight to protect traditional marriage values and the religious rights of those who join me in believing that marriage is between a man and a woman.” The legal avenues to strike back are few. Social conservative activists could use the energy around the court ruling to launch another long-shot bid for an amendment to the U.S. Constitution banning same-sex marriage — the only way to override the court. But the notion of getting two-thirds majorities in each house of Congress and then three-fourths of state legislatures to ratify an amendment is far-fetched at best. Many Republican foes — from those running for president to Georgia legislators — kept the focus instead on the court invalidating the will of voters. “Today’s ruling shuts down that democratic process and usurps the power of the people,” said Georgia Republican U.S. Sen. David Perdue. “Once again, we see a court that has overstepped its limited constitutional role rather than allow the American people to decide this issue democratically, which is what the Constitution demands.” State Sen. Josh McKoon, R-Columbus, called it a “disappointing” ruling and an overreach by the high court.