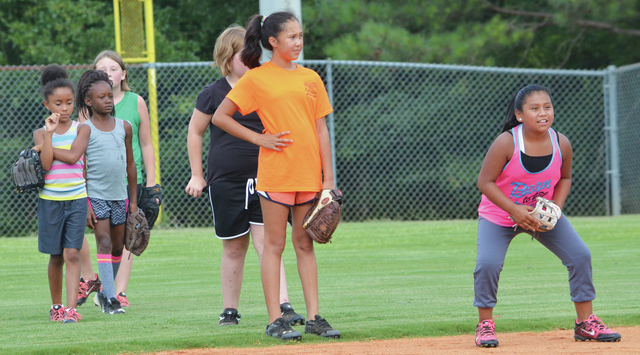 The Hogansville 10-and-under softball team works out at the Hogansville Sportsplex on Monday. The team will play in the state tournament in Effingham County. Kevin Eckleberry | Daily News

It’s always a challenge for an all-star team. When the all-roster is put together, it is made up of players who for the previous few months had been playing on separate teams. Now, those players are being asked to come together and become a cohesive unit, and that’s not always an easy thing. According to Troup County 10-and-under all-star coach Randall Housel, though, that hasn’t been an issue with his team. “The first day, they were getting a feel for each other,” Housel said. “After that, they took to each other well. I’m proud of them.” On Monday afternoon at the Hogansville Sportsplex, the team was working hard in preparation for the Georgia Recreation and Parks Association state tournament that is coming soon. Hogansville, along with the Troup County all-star team, will open play in the state tournament on July 8 in Effingham County. The double-elimination tournament will continue through July 11 when the championship game will be played. “These girls right here, they work really, really hard,” Housel said. “It’s a privilege to be out here with them. I get a lot out of it. They get a lot out of it. And everybody is helping everybody.” Housel said one advantage this team could have is the experience the players have in the state tournament. “The majority of these girls have been on an all-star team,” he said. “They’re all familiar with big games.” Seven of the players were members of Housel’s team that went 13-0 during the regular season, and the others came from the other Hogansville teams. Housel said all of the players have “done great. I couldn’t have asked for more from these girls. They work hard.” The team played its first scrimmage game over the weekend, and it won 8-0. Hogansville will continue to practice, and then in a little more than a week, it’ll be time to play for keeps. “We’ve got a good team. We’ve got a good chance,” Housel said. “They hit the ball good, and they play good defense. We’re looking good going into this tournament.” Reach Kevin Eckleberry at (706) 884-7311 or on Twitter @lagrangesports