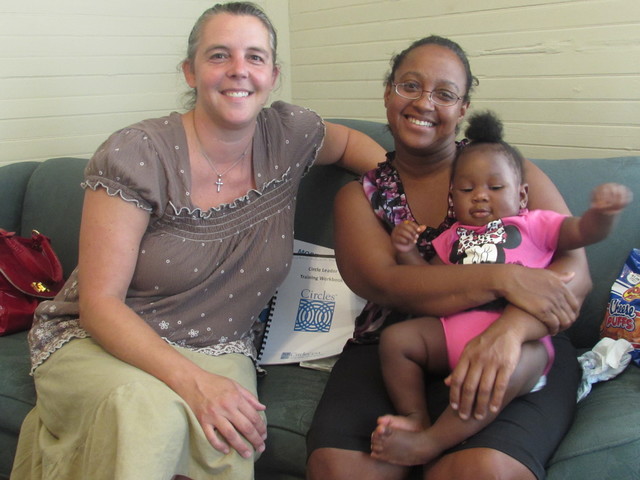 Emmaus Shelter Executive Director Jessica David, left, sits with new tenant Carnetha Abner and her granddaughter. Abner is the shelter’s first client to lease a home from the organization. David said the shelter purchased the renovated home from DASH for LaGrange and is renting it to Abner with option to buy. A view of Carnetha Abner’s home, which includes a renovated kitchen, two bedrooms, a bathroom and a den/living room. DASH for LaGrange repainted the inside and outside of the home, made repairs and added a few touches like ceiling fans in most of the rooms, among other improvements.

By Melanie Ruberti mruberti@civitasmedia.com LaGRANGE – In a quiet, unassuming neighborhood filled with small, quaint homes now sits a wondrous, almost magical palace – at least, that’s how it feels to Carnetha Abner. After living off and on in a homeless shelter for five years, the LaGrange woman finally has a place to call home. “I like everything about it,” Abner said. “It is quiet around here. The neighbors are very quiet and friendly. I now have something all my own.” “She has received her mail at our day center for the past five years,” said Emmaus Shelter Executive Director Jessica David. “Now she can receive her mail in her very own mailbox.” David said the Emmaus Shelter bought the home from DASH for LaGrange, which renovated the house. She said officials with DASH – which stands for dependable affordable sustainable housing – told her they wanted to give the home to a social service agency that would find good neighbors to live in it. Abner was one of her first clients to walk through the doors at the Emmaus Day Shelter when it first opened, said David. Abner still volunteers there and is proud to be a new homeowner. “I’m going to get more stable,” said Abner. “I’m so blessed. There are people that care for me and for my well-being.” She now has a steady job at an accounting firm and is a part of the Circles of Troup program. The home is not just for her stability, Abner said, but her grandchildren’s well-being too. “This home is a relief (to me),” she explained. “I’ve been through a lot with my grandkids. I can now bring them here.” DASH did all the renovations and upgrades to the two-bedroom, one-bathroom house, David said, which included painting the inside and outside of the home, remodeling some rooms, replacing bathroom and kitchen fixtures and adding extras like ceiling fans in the living room. David said Abner will rent the home from Emmaus at a reasonable price, with the option to buy it in the future. “She has always been willing to work,” David said about her new tenant. “We’ve known her to walk along the interstate from Hogansville to LaGrange to get to and from work … I’ve been praying for Carnetha to move into this house and God moved in all the right places to make it happen.” In addition to the decorations and furniture, Abner has already set future goals for her new home and plans on staying in the neighborhood for a very long time “so I can hand it off to my grand kids,” she said. “I had a dream about that, that I was going to buy this house and hand it off to them so they’ll have a secure future.” This is the first home the Emmaus Shelter has purchased from DASH, but David hopes it won’t be the last. Reporter’s note: Citing safety concerns, David asked the Daily News not to identify the location of Abner’s home.