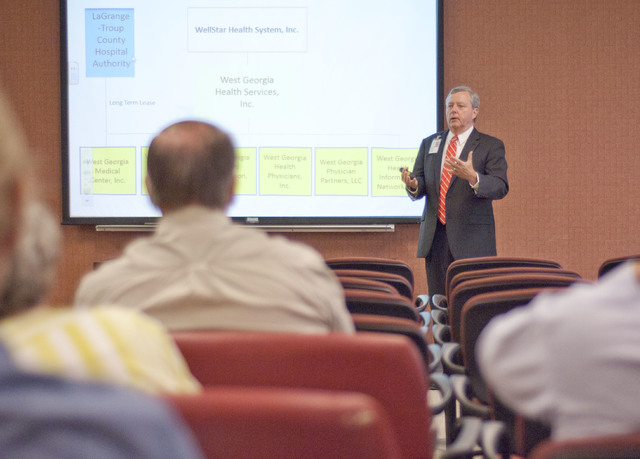 By Tyler H. Jones tjones@civitasmedia.com LaGRANGE — Before announcing they were eyeing a partnership with Marietta-based health care system WellStar, West Georgia Health officials promised they would keep the public informed when the time came. About two dozen people sat in the rear rows of an auditorium at the Enoch Callaway Cancer Clinic on Tuesday during a public forum as WGH CEO Jerry Fulks laid out why WGH is hoping to partner with WellStar and how that could impact the local hospital and people of Troup County. Here’s the breakdown, according to Fulks: • The proposed WGH-WellStar deal is not a sale of the hospital, but a merger in which WGH would remain relatively autonomous, but fall under the umbrella of WellStar’s $1.8 billion network. WellStar’s board would act as the parent and hold reserve powers over WGH. • WGH’s board of trustees still would remain intact with the addition of WellStar representatives. One WGH board member also would be appointed to WellStar’s parent board. • WGH would make up about 10 percent of WellStar’s overall assets if the deal goes through. Being part of WellStar would give WGH access to its network, including legal services and other administrative perks. • The proposed deal has become necessary because of the increasing cost of the delivery of health care under President Barack Obama’s signature health care law, the Affordable Care Act – commonly called Obamacare. • One of the biggest shifts WGH has seen in recent years is a complete flip in the levels of inpatient versus outpatient care. The hospital is also grappling with changes in government Medicare reimbursements. Under Obamacare, hospitals’ reimbursements are tied to the quality of care they provide patients, as well as patient satisfaction. • The proposed WGH-WellStar deal would make the local hospital’s balance sheet stronger, enabling it to continue its mission. “This is a partnership, not a purchase,” Fulks said. “They (WellStar) will merge our assets into theirs to make it a stronger company.” The proposed merger is a two-way street, though, Fulks added. WellStar is interested in a partnership with WGH because of its “quality of excellence, financial performance and the credentials of its staff and services,” he said. The deal is still in its early phases and has not been completed. Fulks likened the process to a marriage. “Right now, we’re dating,” he said. “When we (sign the final agreement) is when we get married.” That period of dating began May 19 and is slated to last 90 days, after which any tentative agreement would head to the state attorney general’s office for review. That review period could take between 90 and 120 days, Fulks said. After Fulks finished his prepared presentation, he took questions from audience members. One attendee, former state Rep. Jeff Brown, questioned why WGH hasn’t released its most recent IRS 990 forms, which would give a clearer, more complete picture of the hospital’s financial standings. The 990 forms are required filings for all nonprofits and are publicly available. They detail revenue, expenses, compensation and other financial data. The 990 forms are due five months and 15 days after the end of the nonprofits’ fiscal year, which means WGH’s 990s would have been due on February 15. “We still haven’t seen any details in 21 months, really,” Brown noted. According WGH marketing director Jan Nichols, the only outstanding 990 that WGH has not  yet filed is for fiscal year 2014, which closed on Sept. 30, 2014. “It is not late,” Nichols said. “Rather, (WGH has) requested an extension, which is usual and routine as indicated by the last few years filing and signature dates. The official due date is Feb. 15, 2015 and was extended to Aug. 15, 2015.  That’s 11 months, not 21 months.” WGH’s fiscal year 2013 tax return was filed on Aug. 8, 2014, Nichols said. Fulks said the compilation of the 990 forms is complex, and requires data from a myriad of sources. He, nor his legal council who was at the forum, were sure why the 990s hadn’t been made available yet. Another attendee questioned why the strategic planning subcommittee, which sought potential partners and oversaw the search process, was made entirely of white men, none of whom are physicians. Fulks countered that first, to serve on the strategic planning subcommittee, the member would have to already have been on WGH’s trustee board. Of that board, three members are physicians and have a financial interest in any potential merger or sale of the hospital, which immediately disqualified them from serving on the subcommittee, he said. After the disqualification of the physicians, only one woman was among the six other trustees. That woman had joined the board only months prior and “was not up to speed,” Fulks said. Of the remaining five, four were chosen. Fulks said the public hearing, which lasted about an hour, would be the final forum WGH would hold regarding its proposed partnership, although the state attorney general’s office would hold a public hearing if the proposed WGH-WellStar makes it that far. Fulks told the audience he wasn’t sure when that hearing would be held, but it would occur within the 90 to 120 period of review by the attorney general. A location has not been set, but Fulks said it would likely occur in LaGrange. Anyone seeking more information or wanting to ask questions about the proposed merger may visit www.wghealth.org and click on the WellStar Partnership link under the About Us tab at the top of the page. — This article updated on Wednesday, July 1, 2015 at 2:56 p.m. to reflect a clarification regarding WGH’s IRS 990 filings.