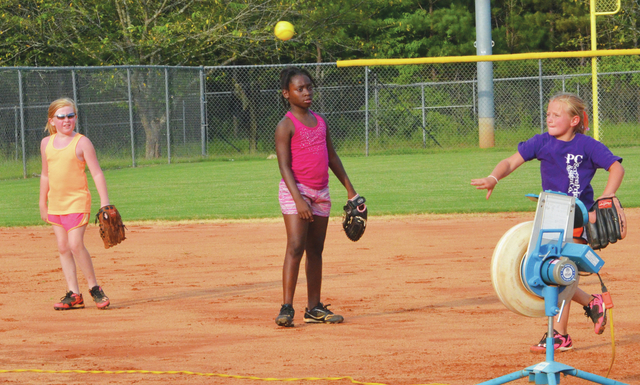 It’s all about learning.

Jason Graham is hopeful his 8-and-under all-star team will enjoy a winning stay in the Georgia Recreation and Parks Association state tournament that gets under way on July 9.

Whatever happens, though, Graham believes the experience of practicing for more than a month and then playing in a state tournament will be extremely helpful for the players on the team.

“We’ve got a really good group of girls,” Graham said. “They’re all having fun. They’re soaking up everything that we’re teaching them. Overall, they’re going to be better because of the experience.”

The players on the team were members of various Troup County Parks and Recreation Commission teams during the regular season.

After the players were chosen, they got together for the first time during the first week in June, and they’ve been working hard since then getting ready for state.

The 8-and-under state tournament will be held in Moultrie, and Troup County will play its opening game against Bainbridge on July 9.

“It’s a big deal to them,” Graham said of the opportunity to play in the state tournament. “We’re building it up. We’ve been talking for a month already about this big tournament, about staying in a hotel.”

On Monday evening at Callaway High’s softball field, the players practiced for two hours, and it was all about fundamentals.

It’s a young age group, so Graham said the big thing is just making sure the players have a solid foundation in the game.

“They’re still fresh in the game,” Graham said. “They need reps on all the little fundamentals. As the kids get older, even up in high school and higher-level ball, they still go back to the basic fundamentals. These girls are just getting them.”

Graham said during the practices, he and the other coaches are working on many of the things that help a player be successful.

“How to catch the ball, how to turn your wrist, how to shuffle your feet, the mechanics of making a throw, how to hold the ball, how to position your arm, all that little stuff,” Graham said. “We’re trying to teach them that, while at the same time advance on into situations they’re going to see in a game, so that they can learn.”

Graham said that “overall, they’re going to be better because of the experience,” but he also stressed that the team is “going there to compete.”

Many of the teams competing at state had to make it through a district tournament, but Troup County didn’t have to go through district.

“We expect the competition to be good, and we expect the other teams to be a little more experienced than we’re going to be because they will have competed in a tournament before we get there,” Graham said. “But, any team can be beat on any given day, and we’re going to be prepared to compete.”