Troup team tuning up for state 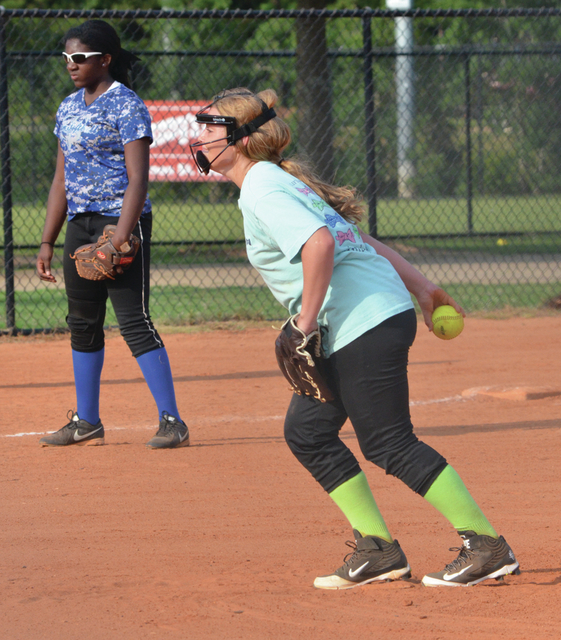 They got a practice run.

The Troup County 13-and-under all-star softball team will play in the Georgia Recreation and Parks Association state tournament next week in Dublin.

As a way to prepare for that tournament, Troup County was at the Shuford Fields complex on Tuesday to take on the West Point all-star team in a scrimmage game.

It was beneficial for both teams, since West Point also has a state tournament coming up.

Teresa Dennis, one of the coaches for the Troup County team, said it was a valuable experience.

Another one of the team’s coaches, Jeff Hall, said playing a game allows the players to notice things they may not see in practice.

“It was really good,” he said. “I think the girls saw some things that we can work on. Sometimes you don’t see things until you get in game situations with them. I think they learned a lot. I think we’ve got a good group of kids, and West Point does, too. It went really well.”

Dennis said the biggest challenge has been getting all of the players settled into a position.

Many of the all-stars played the same positions on their regular-season teams, so some of them have had to move to new spots on the field.

“Some people during the rec ball season, they may have been a pitcher on their team,” Dennis said. “We have five different girls that pitched during rec ball season. So they’re playing different positions. A lot of them are playing new positions during all stars. You’re just kind of refining your skills.”

Hall said it serves the players well to try out new positions and to expand what they can do on a softball field.

“That’s good for them. You wish every kid could learn every position, you really do,” Hall said. “Some of them are playing positions they haven’t played. They’ve done well.”

There was a nice turnout for Tuesday’s game, and Hall said that was a welcome sight.

“You’re always glad to see the parents there,” Hall said. “We appreciate that, and I know the kids do, too.”

Troup County and West Point will play again in a scrimmage game on Monday at 6 p.m. at Shuford Fields.

Then it will be time to head to Dublin for state.

Troup County will begin play in the state tournament on July 8, and it will be looking to advance to the state-championship game on July 11.

“They can do it,” Dennis said. “It just depends. If the girls play like they’re capable of playing, they can do it. It’d be great to win the state championship.”

Troup wraps up stay at district