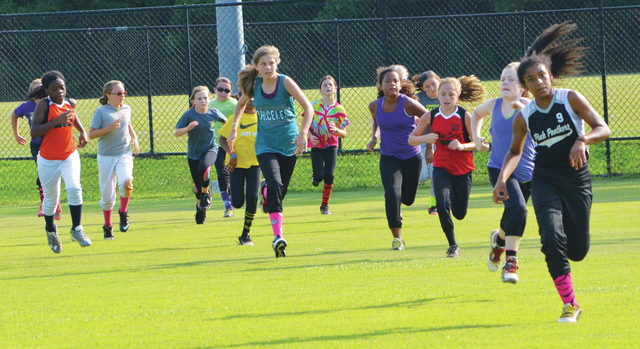 The Troup County 10-and-under softball all-stars run at the start of practice on Tuesday at Shuford Fields. The team will play in the state tournament next week. Kevin Eckleberry | Daily News

They’ve been here before.

When the Troup County 10-and-under all-star team heads to the state tournament in Effingham County next week, it won’t be a new experience for many of the players.

“The thing about these girls, I think there’s six or seven of them, maybe even eight, that played on the 8-and-under team last year that traveled down to Cordele,” said Chris Horton, head coach of the Troup County 10-and-under team. “They got an experience last year. This year they’re ready to go back and try to prove something. We’re excited about it.”

Troup County, along with a Hogansville all-star team, will begin play in the state tournament on July 8 at the Sand Hill Complex in Guyton.

It’s a double-elimination tournament, and the final two surviving teams will face off for the championship on July 11.

“We’ve got a good group,” Horton said. “They come out here ready to work, that’s for sure. We’ve been four to five days a week for the past five weeks, so we’ve been practicing in the heat and everything. They’re pushing it.”

Horton said it was a tremendous spring in the 10-and-under age group, and the depth of talent among the various teams is represented on the Troup County and Hogansville all-star teams.

“We’ve got a girl pretty much from every team,” Horton said. “Between this team and the Hogansville team, I think each team had a representative on the all-star team. The league’s definitely getting better. The whole softball program in Troup County is coming up, doing better. The talent’s here, and the girls showed up this year.”

Horton added that “last year we couldn’t get a representative from each team. But this year, we did. It’s getting a lot better.”

The Troup County team got a chance to play a scrimmage game against Hogansville on Saturday, and Horton said that’s helpful heading into state.

Most of the teams participating at state had to make it through a district tournament, but Troup County and Hogansville didn’t have to.

While most of the teams at state will have had more experience playing this summer, Horton doesn’t think it’ll be a problem.

“We’ll be ready,” Horton said. “These girls that were here last year, they know what they’re going through, so that’s going to help them.”