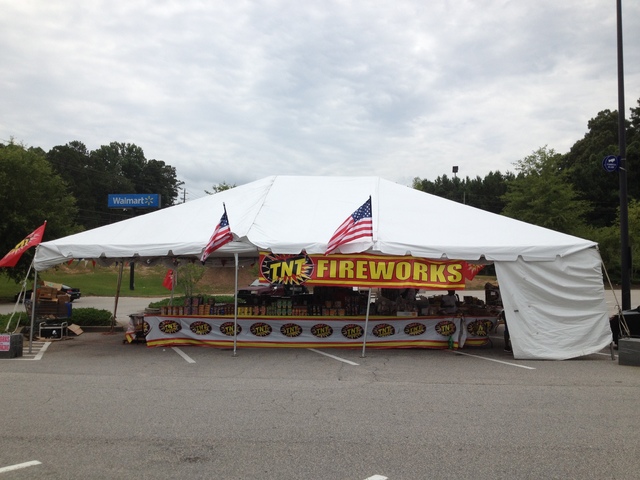 LaGRANGE — Georgians can buy high-grade fireworks after a state law that went into effect Wednesday. House Bill 110 legalized the sale, possession and use of explosive devices previously outlawed by lawmakers decades ago. For many years, some Georgia residents have ignored the ban on explosive fireworks and crossed over state lines in order to stock up on fireworks for celebrations like the Fourth of July. Many throughout the state may still have to travel over the state line in order to purchase the high grade explosive fireworks due to the lack of fireworks retailers that have received proper approval by the state to sell the products. “As of right now, we have had no fireworks retail businesses that have applied for licenses in Troup County,” said Jay Anderson, senior building official for Troup County. “There’s a process that they must go through before they can legally sell these fireworks, and that includes getting approval from the county.” According to Laura Wright, a spokesperson for Insurance Commissioner Ralph Hudgens, the state has received 424 applications for business licenses and 354 of those have been approved. Many Troup County residents can buy smaller, less dangerous fireworks from tent retailers located throughout the county. Shoppers can find some small retailers at tents set up outside of Walmart shopping centers. “We sell a lot of different kinds of fireworks here at our tent,” said Zakia Jones, manager of TNT Fireworks tent current setup in the parking lot of Walmart of New Franklin Road. “If you want to get the larger, louder fireworks that have just been legalized, you might still have to go to Alabama to find them.” Jones operates the tent store with her father, Alonzo, and her two sons. Under the new law, Georgia residents can purchase and use firecrackers, torpedoes, skyrockets, sparklers and other combustibles and explosives. “It can be very dangerous, but it’s just like anything else, if you make it illegal, people are still going to find them,” said Alonzo. “I’m glad to see them finally become legal so people can enjoy them. I’ve always loved a good fireworks show.” HB 110 was met with stiff opposition in the House of Representatives over the past year. Many lawmakers listened to concerns from firefighters and paramedics over the dangers and repercussions legalization would have on Georgians. “The Troup County Sheriff’s Office recommends that a responsible adult supervise all fireworks use,” said Sgt. Stewart Smith. “Fireworks can be dangerous if used improperly, and each year, hundreds of people are injured while using them.” Smith, in a press release, detailed safety precautions and specific parts of the law that residents must adhere to. Throughout the state of Georgia, fireworks may be used during the hours of 10 a.m. to midnight throughout the year, except on Jan. 1, July 3 and 4 and Dec. 31, where the hours are extended to 2 a.m. Smith also urged caution in the locations that residents use fireworks. They can not be used within 100 yards of a nuclear power facility or gas station, or a facility that refines, processes, or blends gasoline. Kevin Norred, deputy chief fire marshal for Troup County Fire Department, also listed many safety precautions in a press release that residents need to take before lighting a fuse. Norred stressed the need to have a sober adult present in order to supervise the use of fireworks. Among several other points, he noted that it is important for residents to keep a water hose or water source nearby to prevent starting forest fires. “Never approach or re-ignite a firework that doesn’t light the first time,” said Norred. Jones and her father have noticed much more consumer interest in the purchase of fireworks since last year. “I think that the passage of this law will make for one of the best Fourth of July celebrations ever in our state,” said Jones. “We hope everyone stays safe and enjoys themselves while they celebrate our Independence.” Donny Karr | Daily News TNT Fireworks, setup in a temporary canopy in the parking lot of Walmart on New Franklin Road, is one of a few fireworks retailers operating in Troup County for the week of the Fourth of July. Georgia lawmakers passed House Bill 110 earlier this year, legalizing the sale and use of consumer fireworks in the state. The law took effect Wednesday, but many residents may have to travel elsewhere to find fireworks.