Tigers get chance to play in Athens 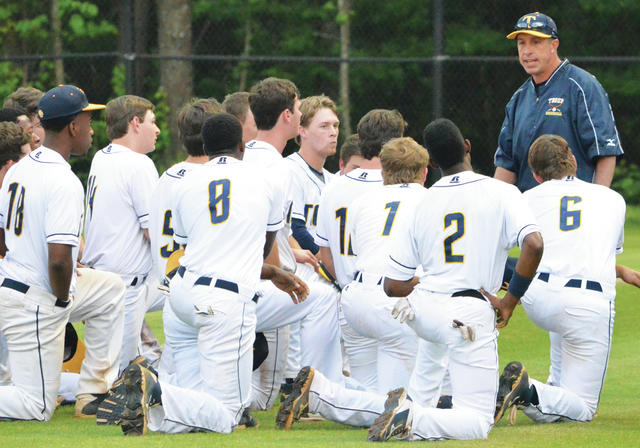 The Troup Tigers put the wraps on their summer baseball schedule by participating in a team camp at the University of Georgia last weekend.

The Tigers were one of a number of teams taking part in the three-day camp, which was held at Foley Field and was put on by Georgia head coach Scott Stricklin.

The Troup players received instruction from Georgia’s coaches, and they got to play two full games and parts of another game on Foley Field, where the Bulldogs play their home games.

The weekend was especially productive for shortstop Ryan Bliss, who received a scholarship offer from Stricklin, even though he will only be a sophomore next season.

“I think the guys really enjoyed it,” Troup coach Craig Garner said of the camp. “That, plus I think coach Stricklin got a good luck at several of our guys. Even though that was the only offer he made, I think several of our guys are on the radar, so maybe something else will come from it.”

Troup was playing its third and final game of the camp when Mother Nature intervened.

“The rain came and the lightning came,” Garner said. “We could have waited around a few hours, but it didn’t look like there was very much relief in sight, so we decided that it’d probably be best to end it and call it a weekend.”

Troup began its summer schedule after completing an exceptional season.

The Tigers went 25-6 and reached the second round of the Class AAAA state playoffs where they lost to Wayne County.

The Tigers headed into the summer without many holes to fill, with most of the key players from the 2015 team set to return next spring.

A handful of senior contributors did graduate, though, including catcher Jonathan Foster and outfielder Tyler Bunn, who are both headed to play college baseball.

Foster will be a member of the Auburn baseball team, and Bunn is going to Abraham Baldwin Agricultural College where he’ll be a teammate of former LaGrange Granger Tristain Daugherty.

Nearly everyone else is coming back, including standout pitchers Winston Turner and Bo Halcomb, along with Bliss.

Those three men have split their time this summer between Troup and their travel teams.

The Tigers did something a little different this summer according to Garner.

Instead of just playing games with opposing teams, the Tigers also practiced with them, making for some long but productive days.

Troup had practice days with Brookstone and Heard County.

“We scheduled in a couple of practices with some other teams,” Garner said. “That was really interesting. I enjoyed that. It ended up being a lot of work for the kids. But it was different and enjoyable as far as getting with another team, and seeing the way they do things.”

OF NOTE: For more on Ryan Bliss’ big weekend in Athens that culminated with a scholarship offer, see Friday’s sports section.