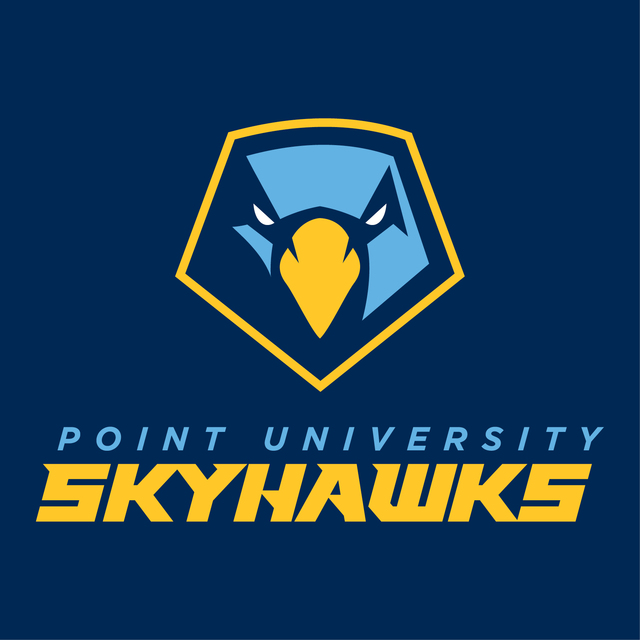 The new Point University visual brand, designed by SME, a New York City-based strategic branding agency. The new look will be used in association with each of the university’s 19 sports teams, as well as with the Marching Skyhawks.

WEST POINT — Point University recently announced an updated look for Skyhawks athletics and for the university’s new marching band. The new visual brand, which was designed by SME, a New York City-based strategic branding agency, will be used in association with each of the university’s 19 sports teams, as well as with the Marching Skyhawks, who will take the field for the very first time in the fall during football season. The new primary logo utilizes the athletic program’s iconic Skyhawk head, which has been updated with a clean, evolved look and paired with an angular wordmark. In addition to the primary mark and the Marching Skyhawks logo, two secondary marks – a “Winged P” and “Skyhawks Shield” – have also been developed to help tell the complete Point University Skyhawks brand story. “Our student-athletes asked for a new visual brand that better reflects their perception of what a Skyhawk personifies and one that differentiates them from their competitors,” said Point University President Dean Collins. “We feel this new identity represents well our rather new Skyhawks mascot and still is in keeping with the university’s overall athletic brand developed several years ago.” According to Athletic Director Alan Wilson, the purpose of the project was to build a stronger visual identity that reflects the values of Point University athletics and the Skyhawk spirit. “One of our main objectives was to build on our tradition while designing a visual brand that is exciting for recruits and current student-athletes,” said Wilson. “We also hope this new design will help us gain consistency across all of our sports uniforms.” For the new identity, SME explored many creative options, but ultimately built the brand around the uniqueness of the Skyhawk head icon. “From SME’s perspective, we always look towards finding the authentic voice of each brand we work with,” said Ed O’Hara, Senior Partner at SME. “In the case of the Skyhawks, this is represented by the Skyhawk head. It is viewed by the Point University community as a differentiator amongst other collegiate athletics programs and reflects the Skyhawks’ nature as fierce and formidable opponents.” The Point University campus store will carry new Skyhawks merchandise later this summer, both in-store and online at pointuniversityshop.com. For more information on the Point University Skyhawks, visit pointskyhawks.com. Contributed report from a press release submitted by Point University.