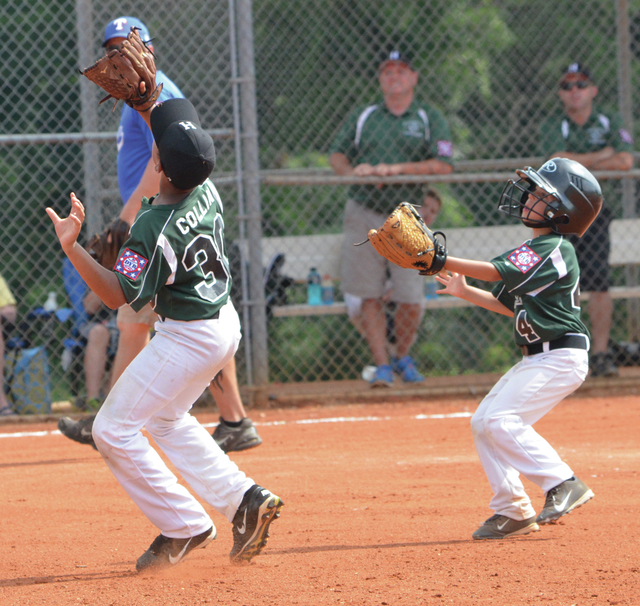 MANCHESTER – It was a loss, but the Hogansville all-stars completed their stay in the state tournament with an outstanding showing.

In their fourth and final game in the Dixie Youth Baseball 7-8-year-old state tournament, Hogansville was matched up with a strong Thomaston team that rolled to a district championship last weekend.

Hogansville stood tall and made a game of it, with Thomaston holding on for a 7-3 victory on Sunday afternoon.

It was a nice bounce-back performance for Hogansville, which lost to Brookwood 21-6 earlier on Sunday.

Hogansville coach Sammy Karvelas said the team used the break between games on Sunday to relax and think about something other than baseball.

“The first game, they all seemed to be real stiff,” Karvelas said. “So in between the first and second game, they were playing football. They relaxed. Maybe that’s the ticket. They played really well.”

Hogansville finished with a 1-3 record in the state tournament.

Hogansville opened state play with a 13-4 loss to West Macon on Saturday, and later in the day, it beat Jones County 10-0 for its lone tournament win.

Hogansville then completed its summer season with Sunday’s two games.

“I set a goal to at least win one (at state),” Karvelas said. “This is our rec team. For us to come win one at state, that says a lot about these kids.”

Karvelas is hopeful all of the players on the team will continue to play baseball, and perhaps get to experience all-star baseball again.

“I think most of them will continue to play,” Karvelas said. “It was great for them.”