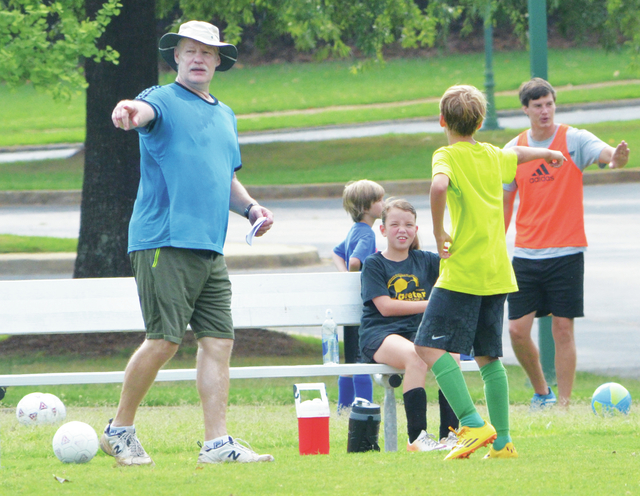 He’s ready for season number two, humidity and all. Fred Wagenaar, who for the previous 10 seasons had been coaching at Graceland University in Iowa, arrived last August to take over as the head coach of the LaGrange College women’s soccer team. One of the first things he noticed was it was really, really hot. “The humidity’s a little bit tough,” Wagenaar said during the Jeff Geeter soccer camp last week. “When I came here last August, the first couple of practices kicked my butt, that’s for sure. I came home, and I was flat on my back.” He’s acclimated to Georgia summers now, and he’s ready to lead the Panthers to bigger and better things this season. In Wagenaar’s first year at the helm, the Panthers started 3-0, but they were unable to continue that momentum and finished 6-14. While the record wasn’t what he was hoping for, Wagenaar said he “was blessed with a good group of ladies. Their personality and character was super.” Wagenaar feels the same about his upcoming team, and he’s hoping those players get to enjoy a successful season. “My goal is to certainly play soccer at a higher level than we did,” Wagenaar said. “We’ll see. If I’ve got my stats right, LaGrange has never had a winning season on the women’s side. That’s my goal this year. I don’t think we’re in danger of going 20-0 or anything like that. But I’d like to break the .500 mark. That’s my personal goal.” Wagenaar said he has a positive feeling about the newcomers to the team he has brought in to join forces with the returning players. “I’ve got some really good incoming people,”Wagenaar said. “I’ve got a nice core from last year. I’m excited about the fall, I really am. I think we’ll do really well.” During his 10-year stint at Graceland, an NAIA school, Wagenaar enjoyed remarkable success. The women’s soccer team won nine conference championships during Wagenaar’s tenure, and it made seven appearances in the NAIA national tournament. Overall, Wagenaar had a record of 144-21-21 at Graceland, and he was the conference coach of the year six times. Wagenaar, a native of Canada who has four sons with his wife Kathy, is now attempting to get LaGrange College’s program on the winning track. He knows a key part of that is bringing in talented players, and that’s a different sort of challenge at LaGrange College than it was at Graceland. While Graceland gives out athletic scholarships as an NAIA school, LaGrange College doesn’t. LaGrange College also has high academic standards, so players have to not only have the ability to play on the collegiate level, but they have to be accomplished in the class room as well. “There are no athletic scholarships, which is different from where I came,” Wagenaar said. “You can have a really awesome soccer player, but if she’s got a 1.9 (grade point average), LaGrange isn’t a good school for her. That’s a bit of a different challenge. Every college wants the best students. Generally if they perform well in the class room, they’re at least a good teammate, and they’re disciplined and respectful and all that.” Wagenaar said since his arrival a year ago, he has attempted to become familiar with members of the local soccer community. “I’m trying to get to know the local high schools, the local clubs, things like that,” he said. “That’s also a bit of a learning curve.” LaGrange College’s men’s soccer team is also getting ready for its second season with a head coach. Matthew Evans replaced long-time coach Jeff Geeter a year ago, and the Panthers went 1-15-2 in his first season. Evans, a University of Georgia graduate, came to LaGrange College after spending four seasons as the head coach at Florida College where he had a 33-25 record. Reach Kevin Eckleberry at (706) 884-7311 or on Twitter @lagrangesports