Veal moving up to the lead chair 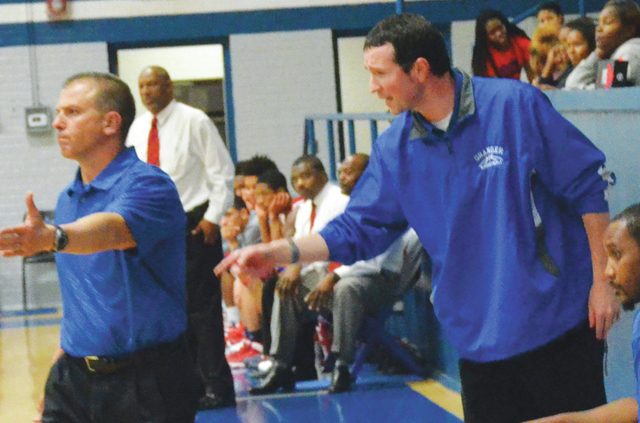 In some ways, things won’t be that different for Mark Veal.

He’ll be leading the same players, he’ll be in the same gym, and he’ll be coaching alongside many of the same coaches he’s gotten to know so well over the years.

There will be one massive change for Veal when the LaGrange High boys’ basketball team opens its 2015-2016 season, though.

For the past decade, Veal has been an assistant coach at LaGrange under head coach Mike Pauley.

Now, Pauley has a new job as the athletic director at LaGrange High, meaning the school needed to find someone to take over as the head coach.

The obvious candidate was Veal, so it came as no surprise when he was offered the chance to replace Pauley, who had been the Grangers’ head coach for 20 years.

“You think about everything,” Veal said about his mindset when he was offered the job. “You go through the process in your mind and everything, you talk to people.”

In the end, Veal said “it just seemed like a natural fit.”

Veal said he’s looking forward to continuing his relationship with Pauley, albeit in a different role.

“It’s an exciting time,” Veal said. “We’re so used to working together, we did it for so long, and we still will, just in a different role. I’m excited for him, and he’s excited for me. We’ve had such a good working relationship and friendship, and it’s going to continue on a different note now.”

Veal, who came to LaGrange after a coaching stint at Jenkins High in Savannah, said he’s learned a lot from Pauley over the years, including the necessity of being flexible in how you do things.

“One thing you learn from coach Pauley is, there’s more than one way to do things in basketball,” Veal said. “There are different ways to do things. You always have to be open to different ideas, open to change.”

Veal said he also appreciates that Pauley has “always been willing to give kids a chance. He’s never had it set in stone in his mind that this kid can play, or this kid can’t. He gives different kids opportunities. That’s one thing you learn is flexibility.”

While there’s the obvious change at the top, Veal said the coaching staff will have a similiar look to it next season.

Scotty Alexander, who joined the staff a few seasons after Veal, will return to the bench next season.

Blake Craft and former Granger Kerun Hill will also return as coaches next season, and Veal said two other former LaGrange standouts, Bernard Brooks and Royal Thomas, will also likely be on the staff.

“I’m very excited about the staff we have,” Veal said. “It’s going to be great. That’s huge.”

When the Grangers open the 2015-2016 season, they’ll be under the direction of someone other than Pauley for the first time in 20 years.

Pauley, a LaGrange High graduate, enjoyed tremendous success during his two decades at the helm, and he said “Mark and I are still going to be working together to try to have a great basketball program.”

LaGrange has had some special moments over the past 10 years, most notably the 2009-2010 team that went 31-1 and lost to Columbia in the state-championship game.

“Coach Pauley could have coached for a number of more years, and that would have been fine with me,” Veal said. “We’ve always got along good. We’re friends.”