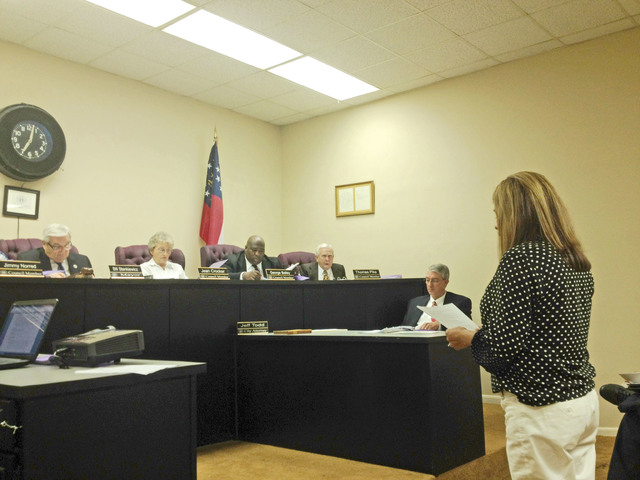 Evie Kettler addresses Hogansville City Council about her concerns over dog tethering during a meeting Monday evening. Kettler is asking the city to draft a new ordinance that would outlaw keeping dogs tethered on a chain or leash.

http://lagrangenews.com/wp-content/uploads/sites/37/2015/07/web1_WEB0707Hogansville1.jpgEvie Kettler addresses Hogansville City Council about her concerns over dog tethering during a meeting Monday evening. Kettler is asking the city to draft a new ordinance that would outlaw keeping dogs tethered on a chain or leash.

HOGANSVILLE — City Council on Monday heard from a LaGrange resident with concerns over Hogansville’s law regarding dog tethering.

Evie Kettler was asked by Mayor Bill Stankiewicz and councilwoman Jean Crocker to present her thoughts on tethering after she made a presentation on the matter to LaGrange City Council.

“I’m happy that the mayor and Mrs. Crocker asked me to come speak,” said Kettler. “I feel like this issue is one that need to be dealt with, and I’m happy with the response so far.”

Kettler’s presentation outlined dangers associated with keeping dogs on a tether or leash for extended periods of time. She noted that tethered dogs can be dangerous to nearby residents if they break free, because they often become aggressive after being chained for long periods of time.

“Nobody should have to live near an aggressive dog that could get loose and potentially hurt someone,” said Kettler. “Continuously chaining a dog is inhumane to a dog and dangerous to a community.”

She suggested that dog owners who keep their dog tethered should instead build a fence to keep the dog inside. Kettler acknowledged that fencing may be unaffordable for some families, but brought up some points that she said should encourage dog owners to use fencing.

“A fence would bring up the value of your home and it’s a one-time investment,” said Kettler. “The fence could always be taken down if you wanted to remove it.”

Stankiewicz commented that LaGrange started drafting an ordinance to address dog tethering since Kettler spoke to City Council members there.

“The ordinance hasn’t gotten to the mayor or the city manager yet, but I’m working with the police department to outline what they would like to do,” said Jeff Todd, city attorney for LaGrange and Hogansville, on Monday.

Some residents expressed their agreement with Kettler’s cause following Monday’s City Council meeting.

“All of our citizens should properly fence in their dogs so that they don’t run loose,” said Wendell Bryant. “I think she’s right. And the city needs to start enforcing the laws they already have and make people pay the consequences for breaking laws and letting their dogs run loose.”

Stankiewicz asked that the ordinance that is being drafted for LaGrange be sent to Hogansville’s City Council for review.

“We would like to look at it and see if we might choose to do something similar,” said Stankiewicz.

Kettler gave packets of information to each of the City Council members detailing her concerns, as well as potential examples of ordinances drafted by other cities.

“I’m not here to make life hard on anyone, or to take away from anyone,” said Kettler. “The reason I’m here is to make things better and safer.”