Man injured in crash in LaGrange 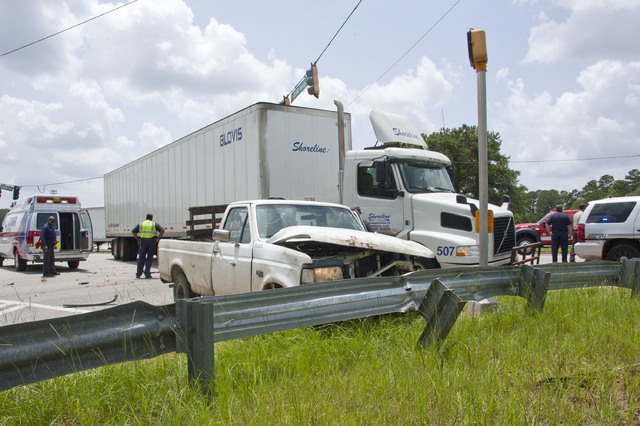 A 1993 Ford F-150 sits damaged on Whitesville Road at the Interstate 85 exit ramp Tuesday after it hit a tractor-trailer and then guard rail at the intersection shortly after 2 p.m. The pickup truck driver suffered cuts to his face and lost consciousness, so he was flown to a Columbus-area hospital for treatment.

By Donny Karr dkarr@civitasmedia.com LaGRANGE — A crash involving a tractor-trailer injured one man shortly after 2 p.m. Tuesday, causing him to be flown to a Columbus-area hospital for treatment. According to Georgia State Patrol trooper Jason McClung, who was at the scene Tuesday, witnesses reported that the driver of a 1993 Ford F-150 allegedly caused the crash when he ran the red light on Whitesville Road at the Interstate 85 northbound exit ramp. The pickup truck was northbound on Whitesville Road. The tractor-trailer was exiting I-85 northbound, and the F-150 struck it, causing the pickup to veer off the road and into a guard rail. “Witnesses said that the driver of the truck ran the red light and hit the tractor-trailer as it was trying to enter (Whitesville Road, Ga. Highway) 219,” said McClung. “That appears to be what happened.” McClung said that the 24-year-old driver of the pickup was transported to a hospital by helicopter because he lost consciousness. The man also suffered cuts to his face from the impact. His condition was unavailable this morning. The driver of the tractor-trailer was uninjured and his truck sustained minimal damage. No further information was available at press time. Georgia State Patrol was investigating the collision.