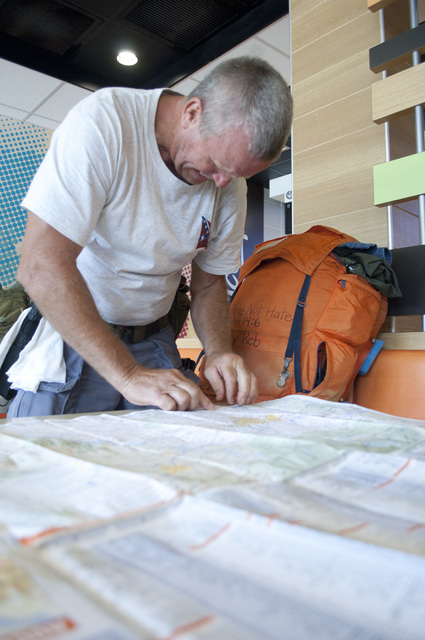 Confederate flag supporter Johnny Cooper, 60, of Hazel Green, Ala., checks a map Monday in LaGrange as he prepares to continue his journey from the Alabama State Capitol in Montgomery to the Jefferson Memorial in Washington, D.C. Cooper is carrying a Confederate battle flag as he walks the more than 800 miles.

http://lagrangenews.com/wp-content/uploads/sites/37/2015/07/web1_0707Protester01RGB3.jpgConfederate flag supporter Johnny Cooper, 60, of Hazel Green, Ala., checks a map Monday in LaGrange as he prepares to continue his journey from the Alabama State Capitol in Montgomery to the Jefferson Memorial in Washington, D.C. Cooper is carrying a Confederate battle flag as he walks the more than 800 miles.

The 60-year-old Alabama man set out on foot from the state Capitol in Montgomery on July 4, bound for the Jefferson Memorial in Washington, D.C., he said Monday. But it isn’t the journey or his bright-orange hiking backpack that’s turning heads – it’s the 5-by-3 foot Confederate battle flag slung over his shoulder.

“To me, it’s like one long protest in the most peaceful way I can do it,” he explained between bites of french fries as he sat in a McDonald’s on West Point Road. “It’s kind of a test for me, just one of the many things I’m doing it for. Just to see how much freedom we have left – I don’t think it’s much.”

Cooper, a nearly retired maintenance man and electronics technician from Hazel Green, Alabama, said he’s concerned about an erosion of personal freedoms and “the Confederate flag flap over that idiot up there in Charleston,” South Carolina, he said, referring to 21-year-old shooting suspect Dylann Roof. Roof has been charged in the killings nine people in a historically black church in Charleston last month. After the shooting, photographs emerged online appearing to show Roof posing with Confederate flags and wearing emblems associated with white supremacy, which sparked public debate about what the flag represents.

The sunburned protester said he has a different outlook on what the flag represents. He’s quick to distance himself from “idiots” like Roof.

“The flag is not about that (hate, racism),” he said. “That was misrepresented, and it ticks me off. It’s ultimately about freedom, and the freedom of the individual over the government.”

Finishing his meal Monday afternoon, Cooper left the McDonald’s and headed east on West Point Road, following it toward Lafayette Square. Occasionally, his journey has been held up when a passerby stops and wants to talk to him. The reactions have been mixed, Cooper said.

People have stopped and given him a few bucks for food, or bottles of water, he said. One man in Valley, Alabama, let him stay overnight at an unoccupied home he owned.

“I hadn’t had a shower in about 48 hours, so I was ready for one,” Cooper said of the overnight stay.

Not all the encounters have been so pleasant, though, he admitted.

“I had an interesting encounter yesterday (Sunday) in Valley, Alabama,” he said. “A young black woman pulled up in a car and we were having a discussion across two lanes of traffic. … She yelled out her window and asked, ‘Why are you carrying that flag?’

“She had kind of a disgusted look on her face, and she said, ‘Do you hate me?’

“I knew what she was going to say next, and I tried to let the spirit speak through me – I’m a Christian – and I said, ‘Are you a Christian, do you believe in Jesus?’ The answer was clear, I said, ‘Then I love you, because you’re my sister.’”

As Cooper continues his journey, the push to remove the Confederate flag from the grounds of the South Carolina statehouse is about to clear its first hurdle. But even if a bill to bring down the rebel banner passes the state Senate as expected Tuesday, it faces a less certain future in the House.

Senators voted 37-3 on Monday to take down the flag and the pole it flies on, both of which were erected in 2000 as part of a compromise that involved removing the flag from atop the Statehouse dome. The vote was well over the two-thirds majority that will be needed Tuesday to send the bill on to the House.

But while that means debate would begin Wednesday in the House, it is far from clear whether a vote will take place the same day – or what the vote will be. House members appear to be less unified.

When Cooper reaches South Carolina in a few days, he may have an answer to whether the flag will still be flying on the grounds of the Capitol building there. Regardless, it won’t change his concerns – they’re much bigger than whether or not a flag flies outside of a building.

“The pillars of society are coming apart right under us … marriage, individual liberties, government invasion of every facet of life,” he said. “For a person like me that used to be free, it’s a scary thing.”

Cooper said he expects to reach Washington in a little over a month. He fully plans to take his Confederate banner all the way to the Jefferson Memorial, “if they’ll let me,” he said.