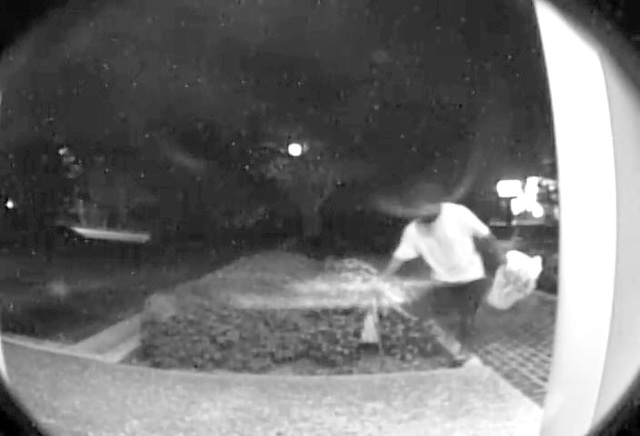 LaGRANGE — The employees of Commercial Bank and Trust on North Greenwood Street are proud to be Americans.

Every Fourth of July, Memorial Day and Veterans Day, the staff lines the bank’s sidewalks with small American flags to honor their country. They’ve been doing it for more than 10 years and have never had a problem – until this year.

Both before Independence Day and after, someone came up to the bank during the night – barefooted – and scooped up every single one of their flags. Ashley McWhorter, one of the bank’s employees, admits it’s not the crime of the century, but the Grinch who stole the Fourth of July frustrates her.

“Oh, I was lit up,” she said. “I think I was probably the most aggravated (employee) about it. I’d say some other things but it’s probably not newspaper quotable.”

When McWhorter came to work Tuesday, she didn’t think much about the display of more than two dozen flags being missing from outside the bank. They’d been put out for the holiday, and since she wasn’t at work on Monday, she simply assumed another employee had picked them up to store them until the next holiday.

When she walked in her office, though, she noticed the box the flags are kept in was empty. She asked around the bank if someone had taken up the flags and, to her surprise, no one had.

“I usually take them up, and I asked if Larry, our courier, took them up, because he does sometimes,” McWhorter said. “I asked another girl who picks them up sometimes, and then I asked Frank, our CEO, ‘hey, did you see who did this?’ I was just concerned because the box was sitting in my office with no flags in it. That’s when we started to think, and we pulled the camera.”

Watching the surveillance footage from the bank’s security cameras, a man can be seen walking up from the parking lot carrying a bag at about 3:30 a.m. on Tuesday. He appears to be barefoot as he walks up and down the sidewalk, plucking the flags from the ground and stuffing them into his bag. After he’s done, he walks away. He doesn’t appear to get into a car – there are no headlights. A few days before the Fourth of July, someone came and stole the flags from the other side of the building, too.

Branch manager Ashley McCoy was perplexed by the whole incident.

“I mean, who is walking around at 3:30 in the morning, barefooted, stealing flags?” McCoy said. Like McWhorter, she said it isn’t the end of the world, and the bank will just buy more flags.

LaGrange police said today there were no other reports of flag thefts in the city, but that doesn’t mean it couldn’t have happened. The bank didn’t report the theft of their flags to police “because they have bigger things to worry about,” McCoy said.

Still, the whole incident is “just weird,” she said.