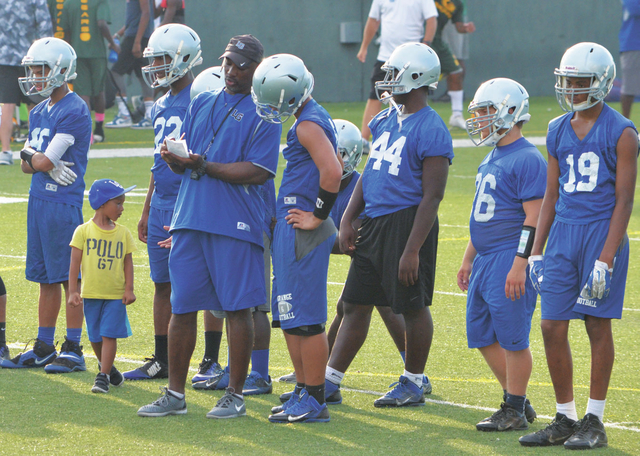 The LaGrange Grangers celebrate during one of their seven-on-seven games on Thursday at Callaway Stadium. Kevin Eckleberry | Daily News

http://lagrangenews.com/wp-content/uploads/sites/37/2015/07/web1_7-10-LHS1.jpgThe LaGrange Grangers celebrate during one of their seven-on-seven games on Thursday at Callaway Stadium. Kevin Eckleberry | Daily News LaGrange gets ready to run a play during one of its six games on Thursday. Kevin Eckleberry | Daily News

http://lagrangenews.com/wp-content/uploads/sites/37/2015/07/web1_7-10-LHS3.jpgLaGrange gets ready to run a play during one of its six games on Thursday. Kevin Eckleberry | Daily News LAGRANGE – With the lights of Callaway Stadium shining brightly Thursday night, the LaGrange Grangers were looking to cap off a long day of football with a championship-winning performance against Starr’s Mill.

In their sixth game of the day in a seven-on-seven tournament they hosted, the Grangers got the win to claim the team title.

It was a productive day for the Grangers as they prepare for a new season that will begin on Aug. 21 against the Callaway Cavaliers.

“It’s success. That’s what these guys need,” said Dialleo Burks, who will head into his second season as a head coach with a handful of new coaches helping him out. “With a new staff, and kind of a new system, we just need to hit the fundamentals, and get those guys just playing without thinking. That’s my only goal is playing without thinking so they can go and just use what they’ve got.”

The seven-on-seven format gives the quarterback and the wide receivers a chance to get plenty of work in.

Against Starr’s Mill, LaGrange quarterback Amad Ogletree was extremely effective, especially when he was getting the ball to 6-foot-3 wide receiver Mike Hardy.

Burks, who knows what it takes to be a successful wide receiver since he successfully played that position for more than a decade as a pro player, wanted to make sure Hardy was heavily involved in the Starr’s Mill game.

Hardy was catching balls when he was covered, and he also managed to get wide open for a touchdown catch in the left side of the end zone.

Ogletree took most of the snaps at quarterback last season, and he looked comfortable running the offense on Thursday.

“He’s going to do some good things for us,” Burks said. “Then we add in the run game, that’s going to be a completely different element.”

LaGrange will get a more game-like test next week when it visits Upson-Lee for a game that will involve the full 11 players on offense and defense.

The teams will run their normal offenses, with pass rushes and everything, but there won’t be any tackling.

“We’ll be at Upson-Lee next Thursday, and that’ll be an 11-on-11 deal, so we’ll get a chance to get some reps in,” Burks said. “You add the linemen in there, and you can see where you’re getting pressure from, different places. That’s more like real football.”

In a semifinal game on Thursday that LaGrange won, there was some excitement when words were exchanged between players from both teams.

Burks loved the passion his players showed in that game, which was their fifth of the day and after they’d been at the stadium for more than four hours, but he did caution them to make sure to not lose control.

“Let them have some excitement. But you’ve got to do it in the right fashion,” he said. “You can’t be out there talking. You do it first-class, and we celebrate with each other.”

Thursday’s competition was the continuation of a busy summer for the Grangers, and a lot of the work has been done at the school’s weight room.

“We’ve been working hard in the weight room,” Burks said. “We’ve had the ninth graders, we’ve even had the middle school over to lift weights.”

In less than two weeks, LaGrange will begin its annual Ironman competition.

Then on July 25, LaGrange will hold its first day of official preseason practice.