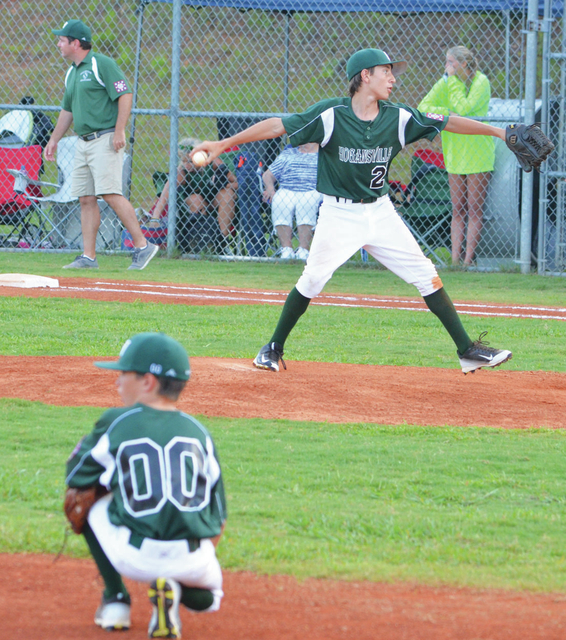 HOGANSVILLE – They’ve got one tournament victory under their belt, and now they’ll try to win another one.

The Hogansville 11-12-year-old all-star team, after winning the district tournament two weeks ago, will be in Augusta this weekend for the Dixie Youth Baseball state tournament.

It’s an eight-team tournament, and the teams will be divided into two four-team pools.

The top two teams from each pool will return to Augusta the following weekend for the final four, and the state champion will earn an invitation to the Dixie Youth Baseball World Series in Lexington, S.C.

“Hopefully we’ll be getting ready for the World Series. That’s what we’re playing for,” Hogansville coach Scott Thompson said. “There’s no doubt we can do it. I have a lot of confidence in these guys.”

Hogansville is battle-tested after three hard-fought games in the district tournament, including two thrilling games against Troup National.

After holding on for a 5-4 victory the first time the two teams met, Hogansville beat Troup National 7-5 in the championship game.

Hogansville led 7-1 in the sixth and final inning of the title game, and relief pitcher Nathan Karvelas got the final out on a groundout to third baseman Carson Garner with the tying runs on second and third.

Since that tournament-clinching win over Troup National on June 21, Hogansville has had nearly two weeks to fine-tune things and get ready for state.

“The only unfortunate thing was (the district tournament) ended too early,” Thompson said. “We haven’t had a chance to scrimmage anybody. All we’ve been doing is coming out each day. We’ve tried to work on different things, little things defensively. Yesterday was a complete defensive practice. Today we’re going a little light, just batting practice today.”

Thompson said the players have shown up for work each day ready and eager to get to it.

“You see the smiles on their faces,” Thompson said. “They like coming out here. They love being around each other. And we’ve tried to make it as fun as we could, and still accomplish the things we came out here to do.”

Thompson said he appreciates the hard work the players have put in this summer.

“These guys, gosh, they’ve been putting the time in,” Thompson said. “Ever since district, we’ve been going at it. These guys are committed to their team, to their teammates. They’re committed to what we’re trying to do, and they’re just ready for the challenge. They’ve been coming out here every day. There haven’t been any beach vacations, anything like that. We took a couple of days off around July 4th, but other than that we’ve been going at it.”