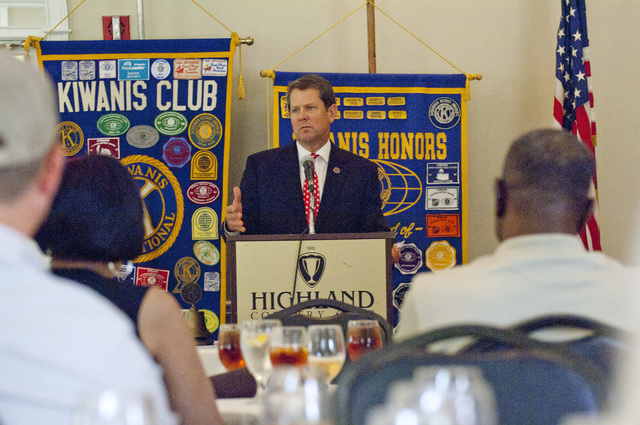 LaGRANGE — Georgia Secretary of State Brian Kemp said Thursday he’s aiming to increase Georgia’s influence on national elections by banding with several other Southern states to hold presidential primaries on the same day. Dubbed the “SEC Primary,” people in seven Southern states will head to the polls March 16 to pick party nominees for the 2016 elections, Kemp said at a meeting of the Kiwanis Club of LaGrange. Georgia, Tennessee, Alabama, Virginia, Texas, Oklahoma and Arkansas have all signed on to the so-called SEC primary, and Mississippi may also join if their legislature convenes for a special session to approve the measure, Kemp said. “I got to thinking about strength in numbers,” Kemp said. “What if we try to go early, and also try to get other Southern states to go with us? If we got a big enough block of Southern states to go early, then there’s no way the candidates could afford to ignore us, which is what’s happened in the past.” Kemp lamented that in past campaigns, many presidential candidates may only stop in Atlanta for a short fundraiser – if visiting the state at all. He said in the future, that could change. “I wouldn’t be surprised to see an (Interstate) 20 bus tour that starts in Atlanta and goes all the way to Texas,” he said. The idea of the SEC primary may already be paying off for Georgia. This year alone, presidential hopefuls ranging from democrat Hillary Clinton to republicans Ted Cruz, Marco Rubio and Mike Huckabee – among others – have already visited Georgia. The state’s population and economic growth may play a factor in its increasingly powerful electorate, Kemp said. “The South is the new heartland of America,” he said. “Georgia is now the eighth most populous state … we have a growing manufacturing industry here … we’ve picked up seats in Congress,” plus, he added, Georgia is home to the world’s busiest airport and a growing set of seaports in Savannah and Brunswick. Working to align Georgia’s primary with other Southern states wasn’t the only initiative Kemp touted. He said he’s worked to decrease “red tape and bureaucracy” of the state’s corporate registration process, streamlining and taking it online for the ease of business owners. “I want to free up business owners from having to deal with the government so they can get back to running their businesses,” he said. Kemp also told the Kiwanis Club about his My Voter Page initiative – an online portal where Georgia residents can register to vote, check their registration status or polling place and find their elected representatives. The website also offers sample ballots, early voting registrations and find key election dates. Voters can also use the site to update a change of address if they’ve moved. The website can be accessed by visiting www.mvp.sos.ga.gov.