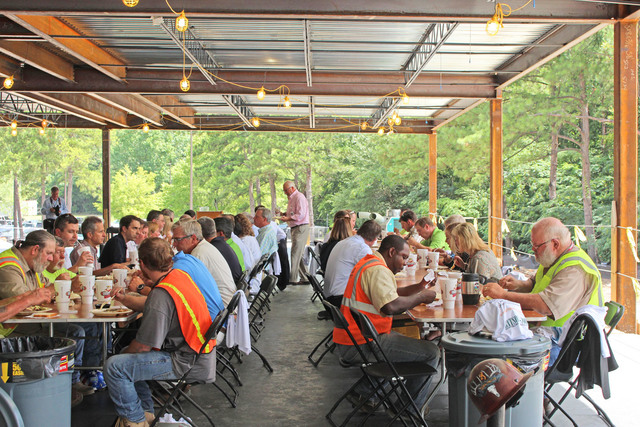 COLUMBUS — Batson-Cook Construction of West Point topped out the Endoscopy Addition and Renovation Project at Northside Medical Center on Wednesday with a luncheon and tour of the project that, upon completion, will bring about an expansion of health care services at the facility. The general contractor also recognized one of its trade partners for exceptional contributions to jobsite safety.

The 9,600-square-foot project at Northside Medical, which was recently acquired by Columbus Regional Health, features a 6,100-square-foot addition with three procedure rooms, nine prep/recovery rooms, and patient restrooms, along with decontamination and clean storage rooms. Renovation of an existing waiting room and reception area encompasses 3,100 square feet. Completion of the project is set for October.

“Batson-Cook is very happy to be working on such an important project for Columbus Regional Health and the Columbus community,” said Frank S. “Chunk” Newman, project executive for Batson-Cook. “It is especially rewarding to be continuing our relationship with Columbus Regional as they expand their presence in the region and we celebrate our company’s 100th anniversary.”

Corey Aikens of Alexander Electric Company, Columbus, was presented a Batson-Cook “Certificate of Recognition” and award for his exceptional contributions toward ensuring jobsite safety.

“Corey has gone above and beyond in his efforts to maintain a safe jobsite,” said Bill Madden, safety manager for Batson-Cook. “He has a keen eye for safety, and has diligently mentored colleagues in ways to sharpen safety awareness and improve safety practices.”

This report contributed from a press release submitted by Batson-Cook Company.